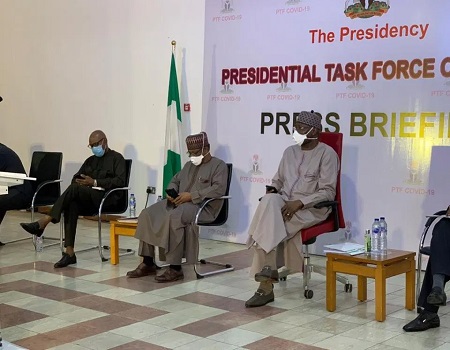 President Muhammadu Buhari has given approval for federal civil servant below grade level 12 who have been stopped from work since the outbreak of the COVID-19 pandemic to return to work from Monday.

This is part of the latest relaxation of restrictions in the third phase of the national response to further open up the country announced by the Presidential Task Force on the COVID-19 Pandemic on Thursday.

The Chairman of the task force and Secretary to Government of the Federation (SGF), Mr Boss Mustapha, who disclosed this during its briefing in Abuja, however, advised chief executives of the various agencies to ensure a system where the workers will alternate their presence at their workplaces.

He also announced the commencement of outdoor sporting activities such as football.

But he affirmed that despite the latest relaxation of restrictions, the country is not yet ready for full reopening.

Mustapha said: “After a very careful review of the national response, the PTF believes that while recent numbers point to a likely flattening of the curve consistent with emerging epidemic control, Nigeria is not yet ready for a full reopening of the economy. It has accordingly recommended and Mr President has approved the following.

“That Nigeria further relaxes the restrictions in this third phase of the response, while maintaining key limitations to curb the risk of a spike in cases. The major changes proposed by the PTF are as follows:

“Gradual and safe re-opening of schools and NYSC camps; Re-commencement of sporting leagues, in particular, all outdoor activities such as football;

“Sustaining the midnight-4am curfew on movement nationwide; and removal of the limitation on civil servants allowed to come to work.”

He said other measures approved by the president are: Maintaining the third Phase of the National Response to COVID-19 for a period of four weeks with effect from 00.01 am on Monday, 19th October 2020 in line with amendments to address economic, socio-political and health considerations reflected in the table above; Sustain engagement with States and Local Governments to improve community sensitisation and sample collection;

“Continue to monitor the impact of school re-opening and the commencement of international travel and enforcing compliance with the protocols set out for the safe resumption of these activities; and maintaining the already established non-pharmaceutical interventions nationwide in order to flatten the curve.”

He said that if the nation must avoid a second wave and continue to flatten the curve, it is imperative for all to jointly address these concerns and the PTF appeals strongly for collaboration and for all hands to be on deck.

Mustapha added: “The reopening of the international airspace has been largely successful with most passengers following the laid down regulations and adhering to testing requirements. We have not seen a spike of cases since the reopening of the airspace.

“The PTF, however, noted the huge challenge posed to our national response by states as a result of poor engagement which manifests strongly in the form of the low level of sample collection across the country.

“After a very careful review of the national response, the PTF believes that while recent numbers point to a likely flattening of the curve consistent with emerging epidemic control, Nigeria is not yet ready for a full reopening of the economy.”

He said that the response remains buoyed by the ever-increasing global collaboration among nations and with international organisations.

The SGF was happy that the PTF has drawn great lessons from the experiences of other countries and has similarly taken measures to reopen the economy though in a safe and cautious manner.

Mustapha observed that even though the world is coming to terms with the new normal, emerging statistics indicate that Nigerians still have to be cautious, vigilant by taking responsibility due to the second wave of the virus in many parts of the globe.

He further said: “In Nigeria, the PTF continues to rely on data, research, science and experience of other nations to inform decisions at all stages. Our National response to COVID-19 remains targeted at achieving the purposes of epidemic control through reduced transmission and minimizing mortality among vulnerable parts of the population.

“Till date, Nigeria has sustained the substantial successes earlier recorded. Although statistics show that the pandemic is not slowing down globally, the number of recorded cases in Nigeria have remained between 100-200 daily for the last four weeks with a progressive fall in the case fatality rate to 1.9 percent.”

Expatiating, the PTF National Coordinator, Dr Sani Aliyu said: “It is, therefore, the informed recommendation of the PTF that Nigeria maintains Phase 3 of the response with further changes to address economic, socio-political and healthcare.

“In this regard, and effective from Monday, October 19, 2020, at a minute past midnight, the following guidelines will come into place.

“The lifting of restriction on outdoor sporting activities including football is in line with earlier consultations with the Federal Ministry of Youth Sports Development and NCDC. However, this is limited to the actual sport itself, not with mass gatherings.

“In this regard mass gathering including at sports events is still restricted as this represent an opportunity for the virus to spread with an increased rate of a second wave.

“For gatherings in enclosed places, this will continue to be limited to only 50 persons with physical distancing and compulsory wearing of face masks except for workplaces.

“The PTF also believes that it is now time to allow civil servants of all grades to resume work safely. Additional guidelines will be provided for heads of MDAs.

“Chief executives and heads of MDAs are responsible for ensuring the strict enforcement of non-pharmaceutical interventions and making sure that their work environment is safe for the staff. Face masks are expected to be worn in every public building including govt offices.”

He said the PTF has developed guidelines with NCDC and the NYSC for the reopening of the orientation camps on November 10, 2020.

According to him, about 100,000 prospective corps members will be tested before they are allowed into the camp.

Sani stated: “The PTF has also arranged for additional safe bags to include the testing of all corps members and staff in the camps for COVID 19 prior to commencement of the orientation programmes.

“It is also time for schools to open but to open safely, and in this regard, we have continued with providing guidelines and engagement with states to ensure close supervision and guidelines and oversight as schools open.”