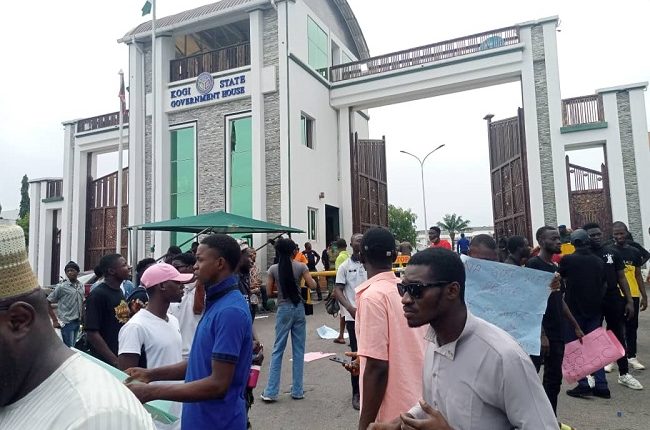 Youths numbering over 1000 have barricaded the Kogi State Government House protesting against SARS brutality in the state.

The youths who blocked the gate of government denied everyone, including security operatives, government officials, access into the complex.

According to the protesters, there is a need for a total overhaul of the Nigeria Police force.

They are asking to see the state governor, Yahaya Bello, despite an attempt by the governors Chief of Staff, Jamiu Asuku, State Security Adviser Air Commodore Jerry Omodara and other government officials to address them.

The protest is continuing despite an address by the state governor warning that some hoodlums have hijacked the genuine exercise to end the dreaded Special Anti Robbery Squad unit established in 1992.

Recalled that Kogi State governor, Alhaji Yahaya Bello on Tuesday had expressed worry over its hijack by people he described as hoodlums and criminals.

Governor Bello who stated this while addressing journalists at the Lugard house Lokoja said he was concerned that, what has been a generally peaceful citizens’ protest is now threatening to dissolve into mindless attacks on government facilities and running battles with the Police.

He alleged that these hijackers are acting in pursuit of nefarious intents which have no nexus with the noble objectives of the protesters and cautioned the youths against being used to achieve some selfish interest of some persons.

“Greatest and Ever Gallant Nigerian Youths, from what we saw yesterday, the ranks of genuine protesters have been infiltrated by criminal elements armed with dangerous weapons. Not only that but they are acting in pursuit of nefarious intents which have no nexus with your noble objectives.

“I was very proud to speak up last week in support of your protests to end police brutality in our country. No doubt the defunct Special Anti-Robbery Squad (SARS) had caused so much pain to so many Nigerians.

“It had allowed its image to become so battered by the crudeness of a percentage few in its ranks that urgent and total overhaul was needed. Your agitation was therefore justifiable and I did not hesitate to identify with you.

“His Excellency, President Muhammadu Buhari also acceded to your requests and through the Inspector-General of Police totally disbanded the unit on Sunday, 11th October 2020. Amongst other undertakings, Mr President promised to set up a Forum for the regular interface between the Public and the Police.

“In addition, he agreed to an inquiry into abuses against citizens by the disbanded unit, with a view to ensuring redress.

“Mr President further made it clear in a personal broadcast yesterday, Monday the 12th, that the demobilisation of SARS was only the first step in a broader spectrum of reforms designed to address wide-ranging questions of discipline and performance by the police and other law enforcement agencies. In Mr President’s words:

He stressed that the disbanding of SARS is only the first step in “our commitment to extensive police reforms in order to ensure that the primary duty of the police and other law enforcement agencies remains the protection of lives and livelihood of our people.’

“Dear Nigerian Youth, Mr President is someone I trust and believe in, please join me in trusting him as we are confident that he will push through the reform

“I, and many people of goodwill who have stood with this cause are thus understandably pained by the needless and violent escalation we witnessed in several places yesterday.

“I hold the opinion that you have won a battle, and I must now urge you not to lose the war. Protesters have a tangible and moral victory in the bag, and it is wisdom to safeguard it. It is now time to step back and explore other forms of dissent which will not provide crowd cover for persons and agenda which you obviously do not endorse. The nation’s Leadership must also be accorded some time and breathing space to push through on promises of change.

“I also urge the highest levels of professionalism and patience on our officers at this period. In the absence of clear and present threat to lives, there is almost no circumstance under which it is right to engage protesting citizens with extreme prejudice. It is neither morally justifiable nor an acceptable function of the policing duty.

“To all and sundry, I urge that the events of yesterday must not be allowed to continue. It is time to let good sense and dialogue prevail all around.

“Please be assured of my continued support, as well as my willingness to remain an ombudsman toward a peaceful and law-abiding resolution to matters arising in this regard.

The party also said that immediately the Caretaker/Extraordinary Convention Planning Committee was put in place after the NWC’s dissolution, the crises that had characterised its affairs were laid to rest…Protesters block Kogi  Protesters block Kogi

His son, Aminu Shehu Idris, confirmed in an interview with the Tribune Online that his late father who was appointed on 15th February, 1975 and spent 45 years in the throne died on Sunday after a protracted illness…Protesters block Kogi

A Kano based industrialist, Chief Kalu Ogbonnaya, has advised the Federal Government to take necessary steps to stimulate the nation’s economy to prevent a recession post COVID-19…Protesters block Kogi

Ortom sets up committee on alleged diversion of palliative