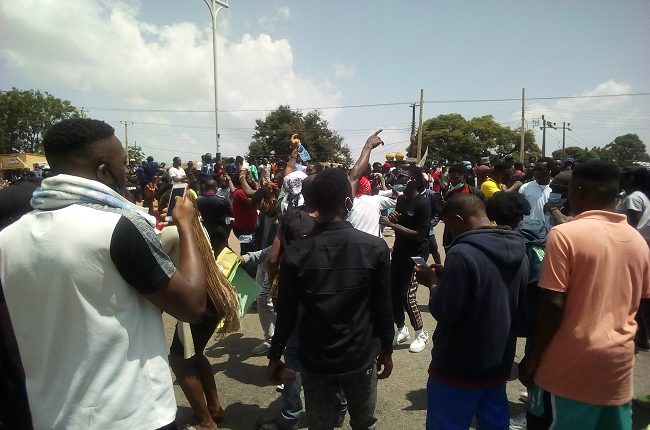 Traffic flow and commercial activities were disrupted in Jos capital of Plateau State on Thursday as youths in their hundreds stormed the city centre demanding for a scrap of the newly created Special Weapons and Tactics by the Inspector General of Police.

Even as the protesters called on President Mohammadu Buhari Police Service Commission to overhaul the entire Police.

Though peaceful, the youths under various aiges stormed the major roundabout in the state capital Old Airport Junction also called NASCO junction as early as 6:30 am with various forms to placards denouncing the federal government and Nigerian Police over the spate of extra judiciary killings of innocent Nigerians by the operatives of the Nigerian Police.

Some of the placards read: “We don’t want SWAT, there’s no difference between it and SARS” We want complete and total overhauling of all security apparatus in the country” President Buhari sack the Service Chiefs now” among other inscriptions.

The peaceful procession caused heavy traffic especially on the flying over close to NTA, Tundun Wada roads while the major highway linking the state with neighbouring states like Bauchi, Gombe and Abuja were totally blocked.

Those trapped in the gridlock occasioned by the protest were seen cheering the protesters and raining causes on the Nigerian Police.

One the leaders who volunteered to speak with the Nigerian Tribune Timothy Gyang said they were surprised on the number of youths that came out to support the protest adding that the establishment of SWAT by the Inspector General of Police was a deliberate ploy to whittle down the protest.

” I can tell you there’s no difference between SARS and SWAT, it is all a gimmick, what the Nigerians want is the total overhauling of the police and other security agencies. The Service Chiefs too must be retired in line with popular demand from Nigerians” he said.

Another protesters identified as Kabiru Yunusa who said disbarment of SARS was not enough called on the Inspector General of Police to prosecute the head of SARS and others who used the unit to torment innocent Nigerians.

However, men of Nigerian Police were seen watching afar off from the scene of the protest while others were directing vehicles to follow alternative routes.
NIGERIAN TRIBUNE