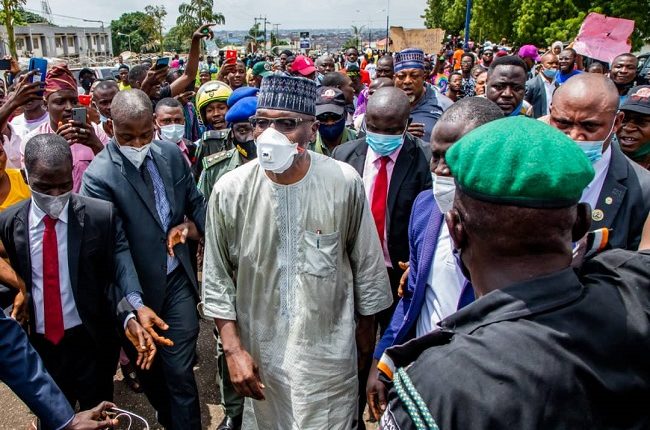 Governor AbdulRahman AbdulRazaq of Kwara State on Thursday walked along with hundreds of #EndSARS protesters to the police headquarters in Ilorin, the state capital, urging them to remain calm and peaceful while their grievances are promptly addressed.

Acknowledging the grievances of the protesters, AbdulRazaq said he and a few governors and some businessmen have recently held a zoom meeting with some individuals involved in the protest movement following which their five-point demands were forwarded to President Muhammadu Buhari.

He said the President was already acting on the five-point demands of the protesters whose activities particularly in Kwara the Governor said have remained peaceful and largely coordinated.

Accompanied by his deputy Kayode Alabi, the governor joined the protest from the Government House Ilorin where the mostly young protesters had converged. He briefly addressed the protesters and then led them to the police headquarters on their request.

Addressing the protesters at the police headquarters, AbdulRazaq said the young people have spoken loud and clear and would have their interest protected by the government.

He announced the setting up of an ombudsman through which people can channel their grievances and have same attended to in the state. He said the ombudsman would be the go-between for aggrieved citizens and security agencies.

“However you look at it, we are all victims. I have since joined the protest. Some of you may notice online that I joined a Zoom meeting on Monday with Hajia Aisha Yesufu, Aliko Dangote, Wizkid and others to arrive at a resolution on this protest. It was part of this that led to the five-point agenda which is being implemented now by the federal government. The President is definitely listening to the complaints,” AbdulRazaq said.

“The Commissioner of Police has listened to your complaints here. I have also listened. I thank you for your calmness,” he said.

“I urge you to please give (Mr President) the time to implement the five-point agenda. Reform is definitely coming to address all the issues.”

The governor meanwhile said not everyone in the police is bad, saying many of them are working hard to ensure public safety.

The protesters had earlier called on the Governor to join them to draw the attention of police authorities to their grievances.

They commended the Governor for joining the protest and urged him to ensure their grievances are addressed.

Kwara State Police Commissioner Kayode Egbetokun, who also addressed the protesters, commended them for being peaceful and said specific officers mentioned by the protesters would be investigated.

“I want to assure you that the Nigerian Police is with the youth. We have heard your report against some of our officers. I want to implore you to report anything against the Police in this state to me directly. I assure you that action will be taken,” Egbetokun said.
NIGERIAN TRIBUNE