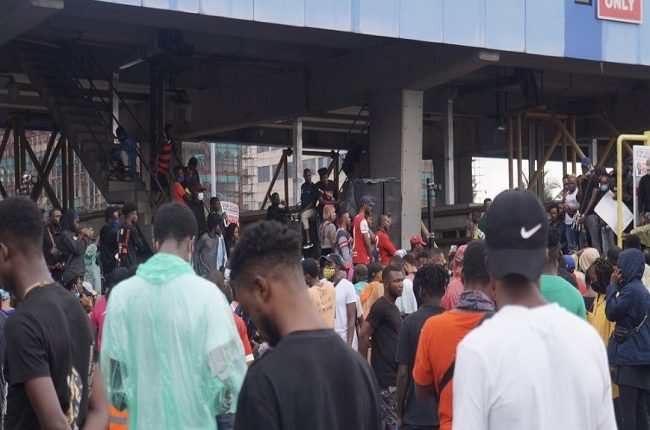 The #EndSARS Protesters at the Lekki-Toll Gate area of Lagos state have continued to put forward their demands in a peaceful manner unlike their counterparts at the Alausa area whose protest was disrupted by hoodlums in the early hours of Thursday morning.

Tribune Online gathered that there is an army of youths at the protest ground wining and dining with different kinds of foods.

It also gathered that the youths were being thrilled by the performances of top celebrities like Mr P, African China and others who took them back to the old school songs talking about bad governance, corruption, and other atrocious acts in the society.

The youths broke the barrier of the toll gates at both Lekki and Ikoyi-linked bridge allowing free entry and exit of the motorist s without making payment for Toll.

The Members of Staff of the Toll gates were also chased away and took over by the youths, pressing home their demands on end to bad governance in the country.

While speaking, One of the protesters, Seun said that the youths are fagged out on the issue of bad governance in the country.

He said that they are not ready to back out until the government fixes all their demands, with the withdrawal of the statement that Nigerian Youths are lazy.

The Protester noted that he is an entrepreneur; hence, doing well for himself and can fend for himself but what about others who cannot.

He stated that the lackadaisical attitude on the path of the political class is enough and they cannot take it anymore.

Itunuola Raybekah said that the protest is peaceful and there is no disruption, adding that the main motive behind the protest is to put an end to all the atrocious activities in the country.

Itunu noted that the political class have for a long time been taken the youths for granted; hence, the call for retaliation.

Another Protester, Olagoke Hakeem said that all the youths demand is a better Nigeria, calling on all other well-meaning Nigerians to join them in the protest for the benefits of the next generation and beyond.

Meanwhile, The Protester stated that those behind disrupting their peaceful protests should desist from it as any plan to kill the youths will not succeed, adding that the almighty God is with them on the issue and would never put them to shame.

He added that the youths can no longer tolerate the shenanigans of the political class, citing an instance of not providing adequate employment opportunities, social security unlike their colleagues abroad.