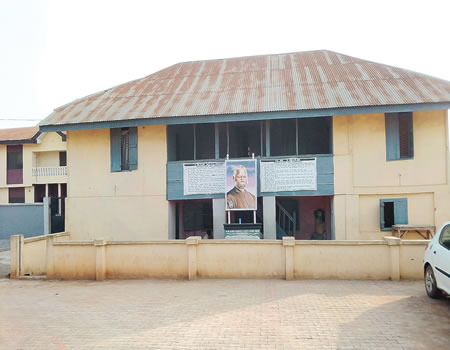 Much has been read and heard about the historic first storey structure built in Badagry, Lagos State by the European missionaries. Less, however, has been asked about another storey building constructed after the popular structure at Badagry. TUNDE BUSARI, who recently visited the second storey building in Nigeria, inside a popular Anglican church at a conspicuous axis of Ota, Ogun State, reports that little attention is paid to this important structure by people in spite of similarities between it and that of Badagry.

In Ota town, the headquarters of Ado-Odo Ota Local Government Council of Ogun State, St James’ Anglican Church can pass for any other church where followers of Jesus Christ congregate to worship and also offer supplication to the Lord. There are other churches of different denominations located at different parts of the town immensely blessed with appreciable number of industries, a spillover of the already crowded Lagos metropolis of sorts.

An important feature which, however, distinguishes this Anglican Church from other places of worship in the ancient Awori town, is the presence of what is known to be the second storey building ever built in Nigeria within the church premises on Pate-Oyinbo, Osi Ota axis of the town.

Nigerian Tribune gathered that between 1842 and 1845, the first storey building was built in the coastal town of Badagry by Christian missionaries on evangelism to Nigeria from the United Kingdom. It is, however, fascinating that except for colour difference, a painstaking look at the second storey building would bring the image of the Badagry structure to mind.

Aside that both are one storey constructions, they also housed the first African Bishop of Anglican Church, Samuel Ajayi  Crowther, a native of Osogun near Iseyin, captured and sold to European slave merchants in the 19th Century. It was learnt that Crowther was assigned to move inward, hence his relocation from Badagry to Ota and the construction of a semblance of the Badagry building.

Evidential proof of Crowther’s presence in the house is still available in the living room on ground floor where a wooden chair, which Crowther used and on which he was said to have translated the English Bible to Yoruba, sits inside the spacious room. Also in that living room is a pot which contains metal currency serving as legal tender while the wooden staircase of the building is a nostalgic sight of the 19th Century architecture.

And though the rooms are not left unoccupied, important features of their days are retained. For instance, there is a safe in one of the rooms upstairs where money and other valuables are said to have been kept. The safe is made of iron and a burglarproof. Besides, an improvised oven, where bread was baked, is still on the ground floor but in a state of disuse.

It was, however, learnt that efforts had been made at different occasions to rehabilitate the building to be useful for human habitation. Mr Banjo Alaba told Nigerian Tribune that, “I am not sure the colour it wears now is the original colour. I am not also sure the church understands why the place should be preserved to attract tourists. I read sometimes last year that the Badagry building attracted more than 10,000 tourists in 2018 alone.

“If our own is also preserved like that of Badagry, a town which is far, we should have more than that number in one year. Anytime I pass through the premises and see the building, I feel sorry for the people of Ota for wasting what should generate money for them,” he said, adding that he had visited the first storey building in Badagry.

But further findings revealed that efforts are being made towards bringing the building to limelight to enjoy the benefit of its rich history like the one in Badagry. A consultant was said to have been taken to the building with a view to assessing its state and the kind of work required to make it a tourists’ destination.

This development was confirmed by the Chairman of Awori Tourism Development, Prince Femi Fadina, who is a son of a past Olota of Ota, Oba Timothy Oloyede Fadina. The chairman said Awori Tourism Development is poised to breathe a new life into the building in order to make it appealing to tourists, many of whom, he said, are ready to visit sites that carry historical significance.

“I am happy to confirm to you that an architect is already working on our plan to return the building to its original state. No one should be satisfied with the current state of the building. That is why we are going to return it to what it used to be in 19th Century. It is going to be wood-for-wood. That is, we are returning those woods with which it was built back. Look at the staircase, for instance. You see that it tells the story of the building.

“Do you observe the quality of that wood? That is where we are going and we are going to get there, God willing.  We cannot have this treasure and allow it to be wasted just like that when Badagry is generating good revenue. The matter has gone beyond rhetorics now; all hands are on deck; we are set to place this building where it ought to have been,” he said.”

Fadina explained further to Nigerian Tribune that the role played by the Deputy Governor of Ogun State, Engineer Naimat Salako-Oyedele, whom he said deserved honour for being a motivator and strong pillar of success, deserves accolades.

“Her Excellency, the Deputy Governor of Ogun State, Alhaja Naima Salako Oyedele deserves commendation for her positive approach to the building and our tourism development generally. She has so far proved that she understands the need for us to develop non-oil products to boost our economy. Again, I thank her for her support and call on other sons and daughters of Ota Awori to also come forward and identify with the ongoing tourism development. We are endowed with tourism products which only need support to transform to revenue,” he said.

The outgoing Fadina reflected on the unveiling of Ota Tourism Strategic Plan under the theme ‘Making Awori Tourism Sustainable by 2030; (Vision 2030), a road map to turn Ota to tourism hub, declaring that with him as the head of the tourism development committee, the next 10 years would witness transformation of tourism sites on the landscape of Ota.

Starting from the ultra-modern palace of the Olota, he said Ota is blessed with other potential tourism goldmine such as the annual Egungun Festival, River Jordan, the Awori Roundabout, Ota Ultra modern bus/metro terminal among others, saying if United Arab Emirates, which was a desert years back, could be turned to tourists destination, Ota would also stop at nothing to harness its resources.

“I am not given to making empty promises. By training I am a practical person, one has travelled to different places home and in the Diaspora and returned home with good lessons on how to do it. You needed to be here during the unveiling to understand my dream better, and with the support of our people, we are in for a serious business because time is not even there. Ten years may look like eternity, I tell you, it is right here with us. That is why I said that all hands must be on deck to deliver,” he added.

Tourism, he revealed, has the potential to make 15 per cent of Ota’s Gross Domestic Product (GDP), projecting about 5 million tourists from different parts of the world coming to Ota by 2030. He assured that infrastructural facilities are underway to match the foreseeable demand of target visitor.

“It needs to be understood without sounding immodest that Ota’s new development initiative will engender success, offer international businesses a range of opportunities through its spectrum of collaboration with 80 per cent of Lagos workforce resident in Ota and its environ. This will also enhance the Lagos-Ogun State border initiative agenda.

“It is an incontrovertible fact that Ota is the Gateway location, with superior facilities and state of the art infrastructure for business. In the next five years, we intend to engage the ministry of transportation, through the state government, to create expansion of the metro line that would ease the stress of the labour force in Ota,” he stated.

Fadina then applauded the Olota of Ota, Oba AbdulKabir Adeyemi Obalanlege, whom he described as a 21st Century traditional ruler equipped with all that is needed to drive the vision of the people. He said he decided to make himself available for the ongoing service because of the disposition of the Olota to development of his domain.

Effects of coronavirus on global taxation