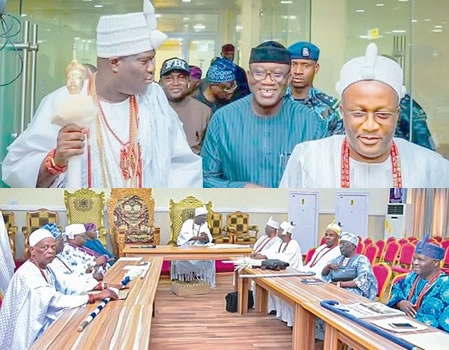 With the timely intervention of the Alaafin of Oyo, Oba Lamidi Adeyemi and the Ooni of Ife, Oba Adeyeye Enitan Ogunwusi, the protracted impasse between the Ekiti State government and some traditional rulers over the appointment of Oba Adebanji Ajibade Alabi as the chairman, Council of Traditional Rulers, seems to be over with all issues resolved. ‘YOMI AYELESO reports the genesis of the almost eight-month crisis and how it was eventually resolved.

Following the appointment of Oba Ajibade Adebanji Alabi, the Alawe of Ilawe-Ekiti in August 2019 as the chairman Council of Traditional Rulers in the state by Governor Kayode Fayemi, about 16 monarchs called ‘Pelupelu’ protested against what they described as a clear violation of the chieftaincy law of the state, as they believed one of them ought to have been chosen to succeed the former occupant of the office, the Oloye of Oye, Oba Oluwole Ademolaju.

The chairmanship tussle snowballed into a legal battle as the Pelupelu obas approached an Ado Ekiti High Court to challenge the appointment on the ground that Fayemi contravened the Ekiti State Chieftaincy Law, which stipulates that the chairman can only be appointed among Pelupelu obas.

They asked the court to nullify Oba Alabi’s appointment, describing the action taken by the governor to appoint someone outside the league of 17 to occupy the prestigious seat as a flagrant disregard for the Ekiti State Chieftaincy Law.

Joined in the suit numbered HAD/76/2019 with Governor Fayemi as first defendant were the Attorney-General of Ekiti State, Wale Fapohunda, and Oba Adebanji Alabi as the third defendant.

The Pelupelu started in 1886 after the end of Kiriji war between Ibadan and Ekiti. It came into existence with 16 obas, including the Deji of Akure and the Owa Olobo of Obo Ayegunle Ekiti. The decision by Akure to secede from Ekiti to form Akure kingdom through Ajapada and the ceding of Obo Ajegunle to Kwara brought about an adjustment in the pelupelu composition. The Elemure of Emure Ekiti, Attah of Ayede and Olomuo of Omuo-Ekiti were screened by the obas then and absorbed into Pelupelu.

But the remaining 11 monarchs have shunned the council meeting and government functions since August 2019. This action ultimately resulted in the query issued to them by the state government calling on them to respond within 72 hours. The government said the monarchs’ deliberate actions and inactions without justification negate the administration of chieftaincy institution in their domains.

The query dated March 11,2020 and signed by one Mr. A. O Adeoye, an assistant director on behalf of the permanent secretary in the Bureau of Chieftaincy Affairs reads: “It has come to the notice of Mr Governor that your Royal Majesty has not been attending the monthly statutory meeting of the State Council of Traditional Rulers and state official functions since August 2019.

“Your conspicuous absence at the council meetings and state official functions without any excuse or justification is considered inimical to the proper administration of the chieftaincy institution you represent. Therefore, Mr. Governor has directed that your Royal Majesty should forward your representation for this inaction through this office within 72 hours of the receipt of this letter,” the query said.

However, the state governor, Dr Kayode Fayemi, clarified that he had no plan to remove any monarch in the state, adding that the letter was written to only 11 traditional rulers to demand explanations for their absence from state functions and meetings.

Fayemi in a statement by his chief press secretary, Yinka Oyebode said, “The Honourable attorney-general wrote to the bureau on Mr Governor directives. Consequently, the bureau (through a senior official) wrote to the affected traditional rulers seeking reasons for their prolonged absence at council meetings. The formal nature of the letter is what is being misconstrued to be a query.

“Contrary to insinuations, this is merely an administrative matter which is neither contentious nor confrontational. It is definitely not a ploy or plan to remove any Oba from office. As public officers, our traditional rulers act as the direct link between government and their domains; they have expected duties and functions, and as an administrative head, Mr Governor should be aware of reasons such duties are not being carried out.”

This development generated a wide range of reactions from stakeholders in the country, including the Alaafin of Oyo, Oba Lamidi Adeyemi, who warned Governor Fayemi against treating the traditional institution in Yorubaland with disrespect.

The monarch stated this in a letter to the state governor dated March 12, 2020, where he said he wrote on behalf of other prominent traditional rulers in Yorubaland, including the Ooni of Ife, Oba Adeyeye Ogunwusi; the Awujale of Ijebuland, Oba Sikiru Adetona, and the Alake of Egbaland, Oba Gbadebo Adedotun.

Worried by the tone of the Alaafin’s letter, Governor Fayemi visited the revered monarch in his residence in Ibadan, the Oyo state capital, where they both had a closed door meeting described by the governor as fruitful towards ending the impasse.

Also, the Ooni of Ife, Oba Adeyeye Enitan Ogunwusi, visited Ekiti State last week and met with the 11 affected monarchs at the palace of the Ewi of Ado before proceeding, alongside the monarchs, to the governor’s office.

After emerging from the closed door meeting with the governor attended by Alawe of Ilawe, Ooni told newsmen that the rift between the governor and the 11 ‘Pelupelu’ monarchs over the chairmanship of the state’s council of traditional rulers had been resolved. He said all the concerned obas have agreed to sheathe their swords in the interest of peace.

Oba Ogunwusi commended Governor Kayode for his efforts at ensuring that there was peace among the state traditional rulers by going to the extent of visiting the Alaafin of Oyo, Oba Adeyemi, to explain his own side of the story. He described the governor’s gesture as an honourable move that signified true leadership.

“The governor is here, all the Pelupelu obas are here. The main founding fathers of Ekiti and I can say to a large extent that it has been resolved. They are the father to the governor and you know we have an amiable son of Oduduwa who is the governor in Ekiti State. Look at what happened yesterday (Sunday); he went to meet the Alaafin and he explained his own side of the story, very honourable. That is true leadership despite the fact he is the governor,” the Ooni said.

Speaking on behalf of the monarchs, the Ewi of Ado Ekiti, Oba Adejugbe, said the issue among the obas was a family affair and would be treated as such since they had agreed to work together, adding that “there is no royal rumbling as such, just a misunderstanding within the family. You heard it all from Ooni. The details will be worked out later. For now, there is peace in the state; we agreed that we would work together.”

Responding, the Alawe of Ilawe, Oba Alabi, commended the roles of governor Fayemi, the Ooni of Ife and others in bringing the impasse to an end. In a statement after the peace meeting, he said, “with deep love and sense of responsibility, I’m using this medium to express profound gratitude to the Governor of Ekiti State, Dr. Kayode Fayemi, for his role in bringing to an end the seemingly intractable disagreement within the State Council of Traditional  Rulers using his political and administrative acumen. Your role during the period coupled  with a large heart displayed would forever be appreciated by traditional rulers in Ekiti State. May God grant you more wisdom to steer the affairs of the  State.

“The exemplary leadership roles of the Arole Oodua, Ooni of Ife, Oba Adeyeye  Ogunwusi, Ojaja II, are appreciated. Kabiyesi, your immesurable ways of mediation using traditional brilliance and native sagacity to bring the brother Obas together will go down in history as unparalleled and unprecedented in conflict management and resolution amongst monarchs in Yoruba land. We deeply appreciate you in Ekiti State.”

Oba Alabi hailed the traditional rulers for toeing the path of peace during the duration of the disagreement and for “showing the world that we can always use internal mechanisms to resolve disputes among Obas in our land.”