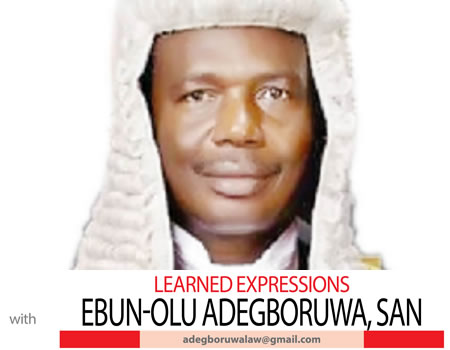 The situation in Nigeria presently is very alarming, and this is no exaggeration at all. The grim realities facing us ahead of 2023 are daily being worsened by the boldness and audacity of criminals, terrorists, insurgents and bandits. The coming governorship election in Anambra State in November will surely be a good opportunity to assess what lies ahead for democracy in Nigeria. Let me share with you an exclusive story that I read in the media last week.

Then a footnote to the list: Bandits operated 105 camps from which they launched deadly attacks on Zamfara, killing and stealing the people’s properties at will; their leaders identified. Grim figures, no doubt.

But this is just a small segment of the chilling report of the high wire banditry raging in Zamfara, but has now spilled into several States across the country, and consequently putting national security in jeopardy. Other segments of the report include the indictment of several members of the traditional institution, top government officials and security forces.”

The report states further that some of the men who engaged in the bloodletting through the Zamfara banditry have moved further North-West and North-Central, wreaking unprecedented havoc in Katsina, Sokoto, Kaduna and Niger States. The ship of State in Nigeria seems to be sliding, steeply into the abyss, without any captain to steer it for rescue. And this should be a grave cause for concern for all lovers of democracy and the rule of law. The much touted hidden agenda is being unveiled to the people of Nigeria in stages and I can feel dictatorship in the air somehow. It is not normal that a country that claims to practice democracy should be in the state that Nigeria is presently, wherein it seems that nothing is working properly, as life has become so brutish and short, with the death rate climbing every day. The link between dictatorship and anarchy is very thin indeed, as once there is a disregard for the rule of law and due process, impunity then becomes the order of the day, leading to lawlessness. Democracy, which is a rule of choice, cannot thrive in an atmosphere where life itself has become meaningless.

In every era, democracy is threatened by dictatorship. A dictator is a political leader who rules over a country with absolute and unlimited power or one who circumvents extant rules, regulations and laws, against the common good. Countries ruled by dictators are called dictatorships. First applied to magistrates of the ancient Roman Republic who were granted extraordinary powers temporarily to deal with emergencies, modern dictators from Adolf Hitler to Kim Jong-un, are considered some of the most ruthless and dangerous rulers in history. The closest we have had in Nigeria was the period of the self-proclaimed maximum ruler, General Sani Abacha. A civilian dictator on the other hand, is one who rose to power through deceit, holding complete and absolute power over the armed forces, is in control of the legislators, has no regard for the judiciary, has gagged the media and does not tolerate any form of opposition.

Dictators typically use military force or political deceit to gain power, which they maintain through terror, coercion, and the elimination of basic civil liberties. Often charismatic by nature, dictators tend to employ techniques of bombastic mass propaganda to stir cult-like feelings of support and nationalism among the people. While dictators may hold strong political views and be supported by organized political movements, they are motivated only by personal ambition or greed to hold on to power, by all means and at all costs. They usually employ a common slogan, to gain mass appeal, creating a false sense of revolution, such as anti-corruption or the like. They crave absolute power for a limited time, allegedly to deal with social or political emergencies. In the calculation of those in power in Nigeria, the game plan was to suspend the Constitution and the rule of law, to give room for totalitarianism.

As the prevalence of monarchies declined during the 19th and 20th centuries, dictatorships and constitutional democracies became the predominant forms of government worldwide. Similarly, the role and methods of dictators changed over time. During the 19th century, various dictators came to power in Latin American countries as they became independent of Spain. These dictators, like Antonio López de Santa Anna in Mexico and Juan Manuel de Rosas in Argentina, typically raised private armies to take power from weak new national governments.

Characterized by Adolf Hitler in Nazi Germany and Joseph Stalin in the Soviet Union, the totalitarian and fascist dictators who rose to power during the first half of the 20th century were significantly different from the authoritarian rulers of postcolonial Latin America. These modern dictators tended to be charismatic individuals who rallied the people to support the ideology of a single political party like the Nazi or communist parties. Using fear and propaganda to stifle public dissent, they harnessed modern technology to direct their country’s economy to build ever-more-powerful military forces.

In 1979, General Olusegun Obasanjo handed over power to Nigeria’s first democratically elected government. The parade ending 13 years of military rule was organized by a young colonel, Abdusalam Abubakar. The elected administration was ousted in 1983, in a coup led by General Muhammadu Buhari, and the military remained in charge until 1999, when Abubakar, who by then had taken the reins, stood down in favor of Obasanjo, who had run for President as a civilian, but retained his military style of governance. Buhari himself has won election (as a civilian) after several years of contest even though he yielded power to a cabal for the better part of his tenure.

With a complacent National Assembly, which has thrown generations unborn into monumental debt through reckless approval of loans by the executive and the emergence of tin gods in various spheres of power, we are gradually settling down for maximum rule. Let us examine the current position of things in Nigeria.There is a current controversy on Value Added Tax, as the appropriate authority to receive and manage the same. The Federal Government claims legal right over it whilst the States are up in arms, with Rivers and Lagos States making laws empowering municipal agencies to take over the VAT administration. It is just one example of how the Constitution is trampled upon at will. The President has traveled out of Nigeria on several occasions without proper handing over, whereas the procedure established by the Constitution to deal with the absence of the President is for him to transmit a letter to the National Assembly, the latter being the elected representatives of the people, officially informing them of his absence. This is meant to avoid confusion and power vacuum. Other examples abound.

In the recent past, it was reported that the Inspector-General of Police embarked upon the recruitment and promotion of policemen and women, contrary to the clear provisions of the Constitution which vests such powers on the Police Service Commission. This has virtually led to the collapse of that institution, which in law should be responsible for law and order. There is a growing clamour by the executive for strict regulation of the media, for censorship and general control of media space. This usually emanates from a culture of intolerance for dissent, especially in the face of unpopular policies of the government. The ban or suspension of Twitter has lingered on beyond all expectations, with the government throwing carrots through empty promises of restoration just to douse the growing agitation against media ambush. From all indications, it would seem that the general aim is to capture the media as a tool for propagating the hidden agenda of dictatorship. Our democracy is in serious danger.

The judiciary in Nigeria is firmly under the grip of the executive, which controls its funding, appointment and even removal. With the experiences of the immediate past Chief Judge of Kebbi State, to the travails of the Chief Judge of Cross-River State, we have experienced a style of imposing fear and terror upon the judiciary, as a way of cowing judges into submitting to the whims and caprices of the executive. When the mode of the removal of the erstwhile Chief Justice of Nigeria is put to remembrance, it is a little wonder that there has now emerged a powerful executive, clothed with absolute powers beyond review by the courts. The power is real, potent and very dangerous indeed.

A people disenchanted with any style of governance can rally round and speak with the voice of rejection with their votes during the election. The conclusion of most election observers for the last (2019) general elections in Nigeria is that the electoral system was flawed and compromised virtually in all the States of the Federation. In most cases, the votes of the people could not determine the eventual winner, thus making the leader unaccountable and beyond control.

There is no gain saying that the present National Assembly and indeed the Houses of Assembly of all the States are under the control, dominion and supervision of the executive arm of government. The idea of separation of powers supported by the robust doctrine of checks and balances is meant to prevent absolutism in governance, especially on the part of the executive, which has control of funds, is in charge of law enforcement agencies and is directly responsible for the formulation and execution of government policies. It is the arm of government that deserves strict control and supervision, by the other arms, but that has not been the case.

With the media in the kitty, the judiciary under firm grip, the legislature willing and compliant, the opposition in shambles, the labour unions only existing for wages and emoluments, with civil societies and human rights groups dead and buried, and bandits and insurgents on rampage, democracy cannot be said to be real in Nigeria.

Zoning in Nigeria and SWAGA 2023

Nigeria in 2023: The legality of zoning

The dictatorship in Edo (2)