The South West
By Yejide Gbenga-Ogundare On Jun 2, 2020 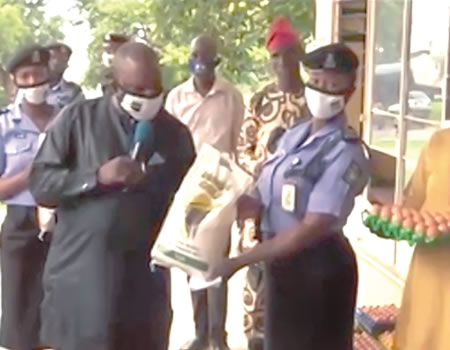 As part of efforts to appreciate efforts of essentials workers especially security personnel that are part of those on the frontline of curtailing the spread of coronavirus, a security outfit, Crime Alert Security Network, founded by Ambassador Amos Olaniyan, the patron of Oyo state chapter of Police Community Relations Committee (PCRC), donated food items worth millions of naira to the Oyo State Police Command.

The donation, financed by the company was done in partnership with Oyo PCRC to encourage the police to put in more efforts and be committed to the fight against crime and also show family of police officers that the efforts and sacrifices they are putting into their job is recognized and appreciated.

Food items donated which includes 550 bags of 5kg rice and 100 crates of egg was mainly to a morale booster to the officers who toil day and night to secure the state.

Ambassador Olaniyan explained that the gesture was to boost the morale of police officers in the state, adding that, “police officers are also human beings; they have family, yet, they have to leave their immediate family to protect the lives and property of the residents while their wives and children are left on their own with the belief that God will protect them, so there is need to appreciate their efforts and encourage them in order for them to continue doing their best so that crime can be reduced to the barest minimum.”

Ambassador  Olaniyan who is also a security expert called  for support of the citizens for the Nigerian Police to ensure a crime free society, noting that, “no doubt  there might be a few bad eggs among them,  even with that, we still have to support them,  if they fail,  we all fail,  if they succeed then our security is certain and we can sleep with our two eyes closed and the tempo of development can beat at more than the average speed for the good of all and sundry.”

He explained that the initiative could be described as a kind of corporate social responsibility and his own contribution towards curbing crime and the spread of coronavirus in Oyo state. He described the current situation in the country as unfortunate and a situation which further makes the people vulnerable, adding that everyone especially those rendering essential service needs to be encouraged at this period for endangering themselves for the society to be safe.

While commending government’s efforts so far, Ambassador Olaniyan called on other well meaning Nigerians to complement the efforts of government by providing help for those who need it and also by appreciating essential workers especially at this period where he said, “everyone needs to be their brother’s keeper and lend a helping hand no matter how little it looks.”

Speaking during the donation, the Oyo state Chairman of the PCRC, Pastor Peter Omofuye stated that the donation was made to recognise the efforts of police in the state especially in terms of securing the lives and property of the residents.

According to him, “when we were all sleeping, these people were moving round to ensure our safety,  residents cannot thank them enough but every individual just have to do the little they can to appreciate them and encourage them for a job well done.”

In his response, the Commissioner of Police in Oyo State, Mr  Shina Olukolu, commended the collaborative efforts of Crime Alert and the Police Community Relation Committee over the years and called on other corporate bodies to emulate the laudable gesture.