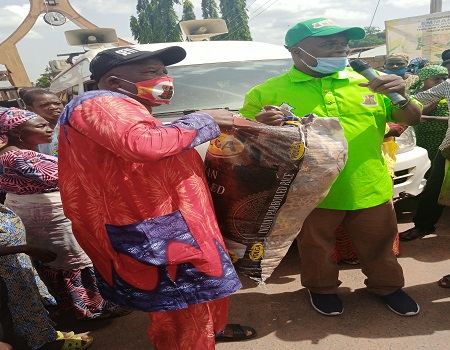 Share
The Oyo State Task Force on Covid-19, on Thursday, commenced the tour of the Oke Ogun zone of the state in a bid to embark on open sensation of the residents on how to stop the spread of the deadly coronavirus pandemic that is ravaging the world.
The state commissioner for information, culture and tourism, Dr Wasiu Olatunbosun, who spoke on behalf of the Oyo State Covid-19 Task Force, at the palace of the Onigbeti of Igbeti, Oba Emmanuel Oyekan Oyebisi, explained that the state government led by Governor Seyi Makinde believes in the welfare and good health of every resident of the state.
Olatubosun, who was in Ogbomoso two weeks ago, for similar exercise, noted that the government will reach out to all the zones in the state. In Oke Ogun zone, there are ten 10 local governments and eight local council development areas.
He explained that over one million face masks have been produced by the state’s Covid-19 task force and are being distributed to the residents of the state for free. He said that thousands of the masks have been distributed and still going on for free in each of the local governments of the state.
He maintained that, even though there have been messages on various media platforms, it behoves on the government to move from streets, villages, towns and cities in the state to sensitise the residents on the need to take precautions given by the World Health Organisation (WHO) and rules of Nigeria Centre for Disease Control (NCDC).

He told the Onigbeti-in-Council, community leaders, market men and women as well as representatives of various organisations to spread the message of containing the Covid-19.
Olatubosun, who decried that the figure is daily increasing, hinted that the task force would soon enforce the compulsory wearing of the face mask which, he said, erring individuals would be prosecuted and fined for N20,000.000 per person.
At the palace of Oba of Kisi, Oba Moshood Oyekola Arowojoye, Olatubosun said the that the level of compliance on nose covering was low. He said, “When I entered Kisi land, I discovered that level of compliance on wearing of face masks was very low. I urge all the security apparatuses to join hands with traditional rulers with a view to combating the nefarious virus.”
Reacting to the allegation, Oba Moshood Oyekola Arowojoye vowed that he, together with government and security agencies would ensure that people abide by the precautions of the government and its agencies.
Sensitising the people in Oja Oba and Kara Markets in Igbeti, Oja Oba markets in Kisi,  Mrs Adekunbi Oladipo, a member of Nigeria Red Cross Society, representing the Risk Communication Pillar of the Emergency Operation Centre of the state Covid-19, urged people to abide by the laid down precautions which include: regular hand washing, compulsory wearing of face masks, avoiding crowded place, using of hand sanitizer, among others.
Olatubosun told journalists in Kisi that the train would move to other parts of Oke Ogun today.
NIGERIAN TRIBUNE

We did not clash with soldiers, Ebonyi police denies