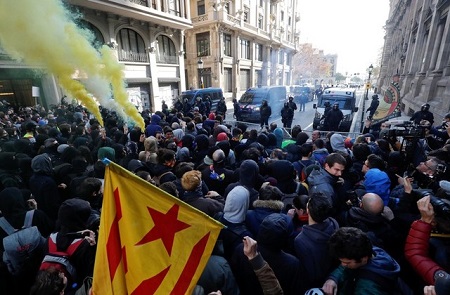 Police dragged Catalan separatist protesters off highways on Friday as Spanish Prime Minister Pedro Sanchez began a cabinet meeting in the regional capital Barcelona in an attempt at reconciliation.

Dozens of protesters, some wearing high-visibility vests, sat on the AP 7 highway, which runs down the Mediterranean coast, hands held in the air as police in riot gear pulled them from the road. Some roads were blocked with tires.

One man was arrested in central Barcelona carrying materials that could be used to build an explosive device, the regional Mossos police force said on Twitter. Around 40 roads were affected by the protests, Reuters said.

More than one year after an illegal referendum on a split from Spain, the wealthy northeastern region of 7.5 million people is still bitterly divided.

Sanchez’s choice of venue was both a show of resolve against full independence and also part of a strategy to secure the survival of his minority government with the aid of Catalonian pro-independence parties by offering them some more autonomy.

Hundreds of protesters gathered outside the 14th-century building on the seafront in the historic center of Barcelona where the weekly cabinet meeting was being held.

Nine separatist leaders in detention had called on Thursday for large but peaceful protests to greet Sanchez.

There were further signs of a spirit of compromise as four of the leaders ended a hunger strike, and their party said it would support Sanchez’s broad plan for the national budget in 2019 and 2020, currently blocked.