• As Gov Ayade call for dredging of channel 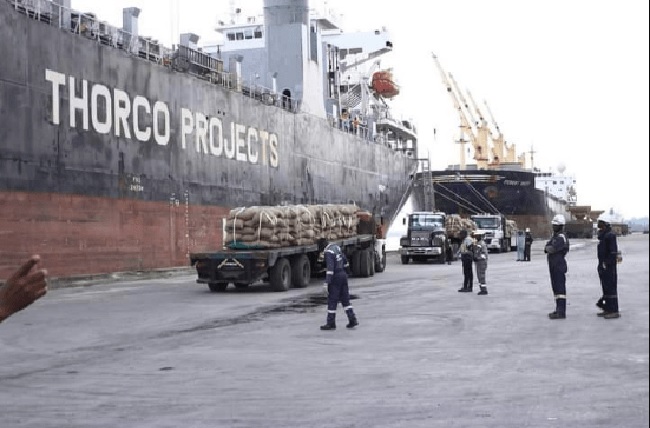 Calabar port, located in Cross River State has been faced with draft limitations for over 14 years after concession, but the ingenuity of Ecomarine Terminals Limited led to the maiden export of cocoa beans from the seaport.

Speaking at the loadout ceremony in Calabar over the weekend, the Governor, Cross River State, Ben Ayade, said the state is rich in agricultural resources. The Governor also urged the NPA to expedite action on the dredging of the Calabar channels in other to aid an increase in exports.

Ayade, who was represented by the Commissioner for Commerce, Mrs Rosemary Archibong, said “It’s time for us not to just export raw materials, but export processed goods.”

The Governor urged the indigenes to exploit the massive opportunities that the numerous cash crops in the State present.

Ayade assured that the waterways are always under surveillance, hence the adequate security in the State.
In her own presentation, the Managing Director of the Nigerian Ports Authority (NPA), Hadiza Bala Usman, said the authority is pursuing the Federal Government’s economic recovery agenda through consistent improvement on the quality of service delivery at the nation’s seaports, especially the eastern ports.

She said Calabar port did not fall short of revenue generation, even during the peak of the COVID-19 pandemic, showing the efficacy of service improvement.

In the words of the NPA MD, “Although, we are not where we want to be, we are definitely not where we used to be. I, therefore, call on all shippers and port users within the Northern and Eastern flanks to follow the example of Starlinks and bring their cargoes to Calabar and other Eastern ports. This will certainly ease the pressure on Lagos ports.”

Also speaking at the loadout ceremony, the Acting General Manager, Ecomarine Terminals Limited (ECM), Calabar, Edward Akpan said the company has identified the gaps that hinder diverse business opportunities that abound in the maritime domain in Nigeria and Calabar pilotage district, in particular, adding that despite the challenges, ECM has consistently marketed the port and it is one of the few ports that export clinker, PKS, cement and now cocoa in the country.

Applauding the NPA for the recent incentive granted to container liners willing to call the eastern ports, Akpan called for a re-introduction of a rebate regime in a bid to drive traffic to Calabar port.

The Acting General Manager, Ecomarine Terminals Limited (ECM) also stressed the need to integrate Calabar port with the national rail link as the benefits of a multi-modal Calabar port will be a huge asset to the nation’s economy.

In his own presentation, the Director-General of the Nigerian Export Promotion Council (NEPC), Mr Segun Awolowo, said exporters suffer undue delay at Lagos due to the traffic congestion.

He said NEPC is vigorously pursuing its zero-oil export agenda while urging government agencies to provide the necessary infrastructure for Calabar ports as an alternative to Lagos ports.

Managing Director, Nigeria Export-Import Bank, Abubakar Abba Bello, said the renewed promotion of export through Calabar port would boost the economy of the region and generate employment for the youths.

Abubakar said export is very important for Nigeria and it cannot continue to focus on the oil sector, but also exploit the non-oil sector.

Managing Director, Starlink Global Ideal Limited, Adeyemi Adeniji stressed the need for government to encourage local investors, noting that the cocoa would be shipped on a chattered vessel.

ECM Terminals Limited Calabar Free Ports is a multipurpose terminal designed to handle and store various types of cargo. The terminal, which consists of three berths, 4-6 has a total length of 480m.