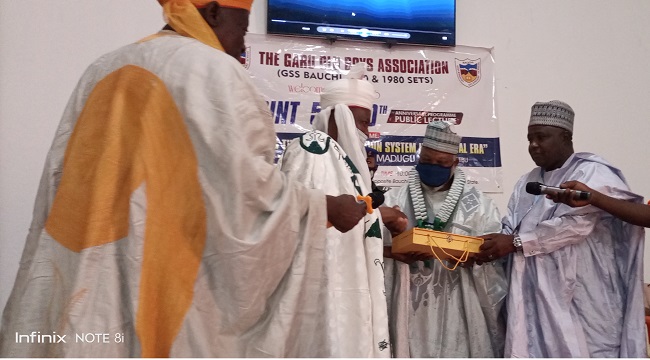 In its resolve to bring back the old glory of Government Secretary School, Bauchi popularly known as Garu, Bauchi State Government has earmarked the sum of N500 million in the 2021 budget for the construction of a new school along Jos road, Bauchi.

The Governor, Sen. Bala Mohammed Abdulkadir made the announcement on Saturday during the joint 40th and 50th anniversary of the School and public lecture organized by Garu Old Boys Association sets of 70 and 80 saying that already, a 20 hectares of land has been identified in Miri, a suburbs of Bauchi metropolis for the project.

Though the Governor said that the Ministry of Education has expressed fear that successive administration may convert the edifice into a higher institution or even sell it out to the Federal Government, his administration is determined to embark on the project as a Model Science Secondary School meeting all the requirements of suchlike schools in the North East subregion or the county at large.

Represented by his Special Adviser on Projects, Arch Baba Mohammed Dadi, the Governor lamented that, “our former school was debased because the school had no vanguards to defend its continuous existence. Protecting this institution once rebuilt is now the role of all members of this Association to be led by our national body.”

Bala Mohammed declared that “I will rebuild it and will leave you with the challenge of its continual survival till we pass on and the baton will be carried on by those that come after us”.

In his speech, Chairman of the occasion, Alhaji Gambo Magaji stressed the need for government and private sector to invest in education because according to him quality education is the best inheritance a child should be left with.

In his welcome address, Interim National Chairman of Garu Old Boys Association, Mohammed Kari said that “For an institution established as far back as 1915, we can in someway be proud of keeping the flag flying but in so many ways be sad for the lack of the womb that has nurtured these great personalities.”

He added that “Our institution has virtually been wiped off the face of the earth but for some few relics that still exist. It has been the prayers and dreams of all to again have a home we can call our own. The efforts and struggles of past members in the systems who had fought to keep the institution alive must be acknowledged and celebrated.”

Mohammed Kari added that “the resilient that has today brought the member together as a group, where we are today. As we celebrate these anniversaries, we have a member of Garu Old Boys Association in the helm of affairs that we believe, with God’s help, will take as to the promised land.”

“He is a member that has provided selfless service to his set and was an active mover to the formation of the National body, the Garu Old Boys Association. This member had been conferred with the title of the PILLAR of his set and the Grand Patron of the Association. I am talking of non-other than His Excellency, Senator Bala Abdulkadir Mohammed, Kauran Bauchi, Jagaban Katagum and The Executive Governor of Bauchi State,” he stressed.

The Interim Chairman added that “We have dreamt our dreams and have prayed our prayers to God for the realisation of our one desire, the rebuilding of our great institution of past glory. Your Excellency, we have read snippets of stories associated to you and the Institution and we hope today we shall hear the full story from the… His Excellency’s mouth.”

Mohammed Kari concluded that, “The Association calls on all sets to organise and affiliate with it, for the bond of comradeship will always be stronger at the set levels. The Association will in due course organised a grand
a convention, at which elections will be held to all the offices in the Constitution and hopefully, see to the launching of an endowment fund that can support the Institution.”

The surprise visit made on Friday night by the leaders of the ruling All Progressives Congress (APC) to former President Goodluck Jonathan at his residence in Abuja triggered a stir in the major political camps, resulting in at least four possible theories..Bauchi earmarks N500m  Bauchi earmarks N500m