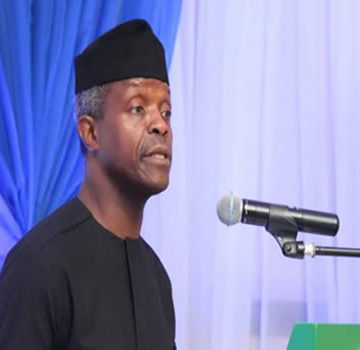 ACTING President Yemi Osinbajo has regretted the consequences of wars in Africa and has therefore told African leaders that a resolve to end conflicts on the continent would be vote for its future.

Speaking while presenting the report of the Peace and Security Council (PSC) of the African Union (AU) as it its chairman in the ongoing 29th Ordinary Session of the AU Assembly in Addis Ababa, Ethiopia on Monday, he observed that the consequences of the wars were self-evident.

According to him, “The tragic consequences of wars and conflicts in Africa are self-evident. The millions killed and maimed, the millions displaced, children out of school, set us back decades economically and socially.

“Our resolve to end wars and conflicts in Africa is therefore our vote for a future of real growth and development for our continent.”

Osinbajo noted that the Peace and Security Council has continued to relentlessly discharge its mandate of promoting peace, security and stability in our continent.

While advising that peace and security agenda must remain on the front burner of the assembly’s deliberations, he noted: “We have no choice; peace, security and stability are fundamental to the realization of sustainable development and to assure our peoples of decent and happy lives.

“As we move towards silencing the guns by 2020, our collective resolve must remain solid and steadfast to effectively tackle conflicts, terrorism, violent extremism and the proliferation of small arms and light weapons.”

Osinbajo said pursuant to AU’s 50th Anniversary’s Solemn Declaration, and under Nigeria’s chairmanship of the Peace and Security Council in the month of July, it will prioritize the adoption of practical measures to address the current security challenges in South Sudan, Somalia, Guinea Bissau, the Sahel-Sahelo and Lake Chad Basin regions.

Furthermore, he said, Nigeria will strengthen the engagement with all AU Member States in confronting the menace of child soldiering and millions of out-of-school children in armed conflict areas.

“To this effect, I would like to urge your full support and cooperation in this endeavour,” he said.

He reiterated Nigeria’s position on the need for the Peace and Security Council to work towards removing all distractions and impediments to the full attainment of operational capacity of the African Standby Force.

He added: “To ensure the effectiveness of the African Union peace support operations, the Regional Economic Communities and relevant international bodies, especially the United Nations must remain strategic pillars of peace, security and development of the Continent as envisioned in Agenda 2063.

“We must redouble our efforts and, and without equivocation avail the necessary resources, in order to successfully achieve the goals set out in Agenda 2063.

“We need to rekindle our political will and determination not to bequeath to the next generation of Africans the burden of wars, poverty and misery.

“It is therefore necessary for the Assembly to reaffirm the overriding importance of holistically addressing the root causes of violent conflicts in our countries.”

Osinbajo on behalf of the Peace and Security Council, thanked the Government of Zambia for ably steering the work of the Council in June and also thanked all Member States of our Union, the Regional Economic Communities and the Regional Mechanisms for Conflict Prevention, Management and Resolution, as well as the United Nations, other international partners, civil society organizations and, indeed the AU Commission for all the support rendered to the Peace and Security Council during the reporting period.

According to him, it is only through such collective efforts that the noble goal of silencing the guns in Africa can be achieved.

“It is essential that the international communities including the UN continue to reinforce their support for Africa peace and security agenda such as the complementarity between Agenda 2063 and the Sustainable Development Goals (SDGs),” Osinbajo stated.