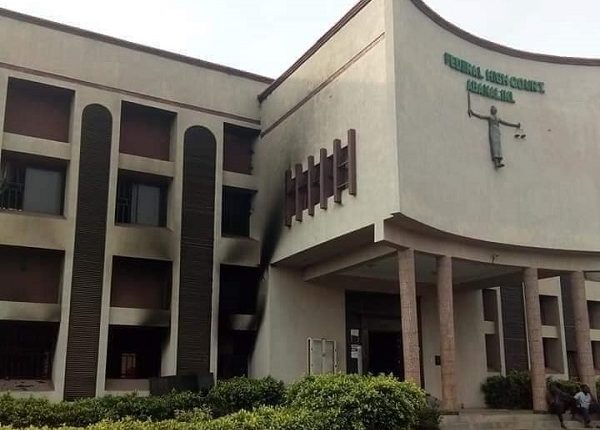 The premises of the Federal High Court in Abakaliki, Ebonyi State was in the early hours of Tuesday set ablaze by yet to be identified arsonists.

The Police Public Relations Officer (PPRO) of Ebonyi State Police Command, Mrs Loveth Odah, who confirmed the incident to the News Agency of Nigeria (NAN), said that no arrest had been made.

She, however, said that the command had begun an investigation to unmask those behind the attack with a view to bringing them to justice.

“Arsonists in the early hours of Tuesday wielding dangerous weapons stormed the federal high court premises and burnt part of the building.

“Though no arrest has been made, an investigation is ongoing.

“The Commissioner of Police, Mr Aliyu Garba, has promised to arrest the perpetrators and bring them to justice,” Odah said.

Meanwhile, a detachment of the Nigerian Mobile Police (MOPOL) has been drafted to the area to secure the court premises.

In spite of the huge investment in the water sector by the government and international organisations, water scarcity has grown to become a perennial nightmare for residents of Abeokuta, the Ogun State capital. This report x-rays the lives and experiences of residents in getting clean, potable and affordable water amidst the surge of COVID-19 cases in the state… Arsonists invade, set part of Federal High Court Abakaliki ablaze

The Lagos-Ibadan railway was inaugurated recently for a full paid operation by the Nigerian Railway Corporation after about a year of free test-run. Our reporter joined the train to and fro Lagos from Ibadan and tells his experience in this report… Arsonists invade, set part of Federal High Court Abakaliki ablaze

Clerk of Senate swears in Ibezim as Imo North Senator