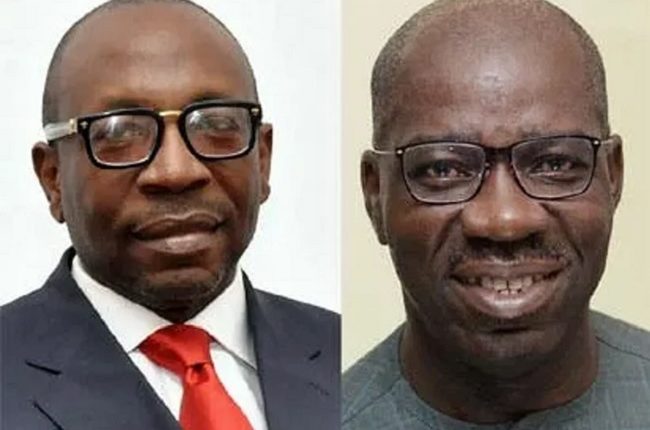 The Campaign Council of the governorship candidate of the All Progressives Congress in Edo State, Pastor Ize-Iyamu has again raised alarm over alleged plot by the incumbent governor and candidate of the People’s Democratic Party, Godwin Obaseki to intimidate and assassinate chieftains of the APC in Edo State.

Former Member, House of Representatives and Vice Chairman, Communication and Publicity, National Campaign Council, All Progressives Congress for the September 19 Governorship Elections in Edo State, Patrick Obahiagbon made the allegation on Friday at a press briefing in Abuja.

Honourable Obahiagbon alleged that the PDP governorship candidate has continued to indulge in mass importation of arms while hoodlums would be deployed on the day of the election to disrupt the process.

He said: “Less than one month to the Edo governorship election, and with defeat staring Mr Godwin Obaseki and his party of tax-collectors, the PDP, in the face, they have both abandoned their pretence at democracy and guided participation in the election, and brazenly embarked on the execution of their plans to prevent the people of Edo State from delivering a verdict on the four-year misrule of Obaseki at the polls on the 19th September with violence and other criminal acts of intimidation.

“Let it be known by the whole world that the Governor of Edo State and his government, in continuation of their disregard for the rule of law, democratic ethics and constitutionalism, has intensified their illegal importation of dangerous arms and ammunition, as well as the daily recruitment and importation of notorious thugs and criminals from neighbouring PDP states, particularly Delta, for the purpose of causing mayhem and disrupting the peaceful conduct of the election in most parts of Edo State.

“We have it on good authority that the Edo State government and members of its kitchen cabinet have drawn up a list of prominent APC leaders across Edo State that they have targeted for maiming, physical assault, kidnapping and sponsored robbery attacks whilst also tinkering with the idea of using heavy-duty trailers to orchestrate road accidents of APC leaders, before or on the day of the September 19th Governorship elections.

“We are alarmed at the rapid multiplication of these firearms and the now-too-common presence of violent groups with prolific ammunition who are on the march with the Edo State Governor as he campaigns from place to place and in the process terrorizing the people and leaving behind an unfortunate trail of sorrow, blood, and tears everywhere he goes for campaigns.

“Rather than excite, Mr Governor’s campaign trail has now become a bad omen, a harbinger of evil, and a stage of wanton violence and shootings, causing residents to flee their homes upon hearing news of the outgoing Governor’s visit.”

The PDP in its swift reaction dismissed allegations raised by the APC as baseless.

The national publicity secretary of the main opposition party, Kola Ologbodiyan in a telephone interview with Tribune Online said Nigerians knew the record of the APC and the aggressor in the forthcoming Edo state election.

He said:” It is unfortunate that Patrick Obahiagbon is trading his reputation for a party like the APC.

“It on record that the PDP campaign team was attacked at the Oba of Benin palace. It is on record that he shifted his campaign itinerary for the APC. Is Obahiagbon claiming that Governor Obaseki organised the attack on himself at the Oba palace?

“Nigerians know the APC for its criminality. Was it PDP that perpetrated violence and brought fake policemen to Kogi state? Was it PDP that set its own Woman Leader, Salome Abuh on fire in Kogi State?

“It is because they are confronted with failure that’s why they are raising alarm. They are not even campaigning but planning how to rig the election. But the people of Edo state are determined to frustrate their plan.”

Asked if the APC would demand a military presence on the day of the election, the APC campaign council said the federal government must explore all avenues to ensure that it was not found wanting in the of its constitutional responsibility.

“The election must be free of violence, devoid of coercion. Whatever security stratagem available to the government must be deployed. Governor Obaseki and his people aren’t interested in free and fair elections, it behoves on government to carry out its constitutional responsibility.”

Obahiagbon denied a claim that the APC was the aggressor in Edo state, as it was part of its orchestrated plot to frustrate the conduct of the election.

“APC isn’t interested in the postponement of the election. Our candidate remains the one to beat. “Why should we do that? If there is anyone scheming for that it is PDP and Obaseki. It is PDP that is afraid of election. That’s why they are importing thugs from neighbouring states.”

More Shocks As Unemployment Data Exposes Misery Status Of Nigerians
BEFORE now, economic and finance experts found it difficult to assess the healthy nature of the labour market and how to measure the impact of government policies targeted at creating jobs because of lack of real time labour data. But on Friday, August 14, 2020, the concerns were only slightly eased as the National Bureau of Statistics (NBS) published second quarter (Q2):2020 labour statistics, the first report since Q3:2018… Edo guber poll

MONDAY LINES: Obasanjo’s (D)Art Of Condolence
Ben Guriano of The Washington Post described them in 2018 as ‘taboo enforcers.’ These are trolls seeking to upend truth and subvert facts about the life and times of the dead. ‘Do not speak ill of the dead’ came originally from a Spartan philosopher, then it was latinated by the Romans to read De mortuis nihil nisi bonum – and got spread around the world like Chinese viruses. The black man, as in all cases, contracted the no-no and turned it into a religion, got drunk with it and won’t mind killing for it… Edo guber poll Edo guber poll

2.4 Million Households To Benefit From FG’s Stimulus Package — Presidential Aide
TO ensure food security for citizens, at least 2.4 million households will benefit from the Federal Government’s post-COVID-19 stimulus package, a presidential aide says. Dr Andrew Kwasari, Senior Special Assistant (SSA), to the President on Agriculture, disclosed this in an interview with the News Agency of Nigeria (NAN) on Sunday in Abuja. Kwasari spoke against the backdrop of projects anchored by the Nigerian Economic Sustainability Committee (NESC) to secure the economy against the effects of COVID-19… Edo guber poll Edo guber poll