Another set of 180 stranded Nigerians return from Libya 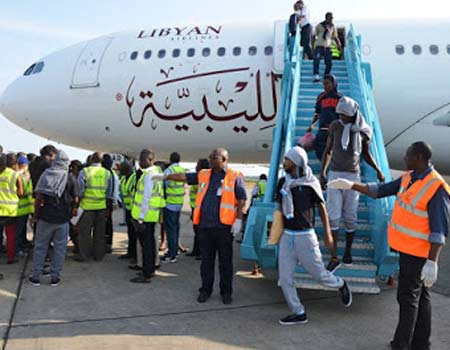 Acting Coordinator of the Lagos Territorial Office of NEMA, Mr Ibrahim Farinloye, told the News Agency of Nigeria (NAN) on Wednesday in Lagos.

He said the flight arrived at Murtala Mohammed International Airport, Lagos, on Tuesday night at about 8:40 p.m.

“The returnees were brought back to the country by the International Organisation for Migration (IOM) through a voluntary repatriation programme for the distressed persons.

“They had left the country to seek greener pastures in various European countries but could not afford to return when their journey became frustrated,” he said.

He said the returnees would be kept for the mandatory seven days isolation period before being allowed to go to their respective places, for those who have no traces of any particular medical issue.

“In the course of isolation periods, the returnees will be trained on various skill acquisition and small scale entrepreneurial techniques.

“Those who are semi-skilled would be trained further and those who wish to embark on entrepreneurial ventures will be facilitated to start on a sound note.

“These are aimed at rehabilitation and to engage them for proper reintegration back to their respective communities after the isolation period,” Farinloye added.

He said that the Port Health Unit of the Federal Ministry of Health, National Commission for Resilience, Migration, and IDPs, NAPTIP, and the Nigerian Immigration Service received the returnees at the airport.