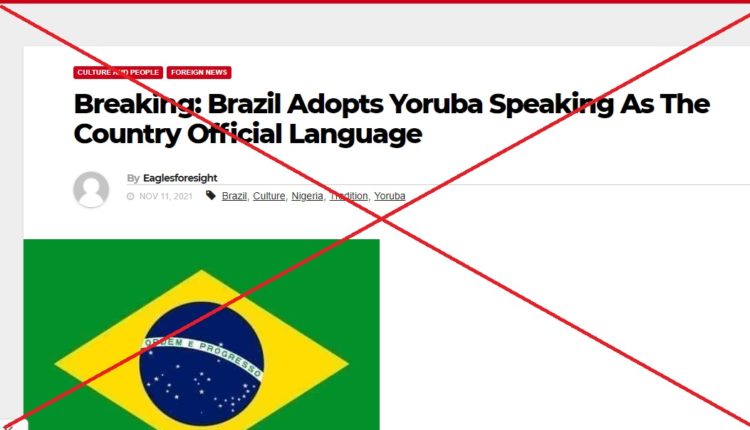 A national newspaper and several online platforms, in a similar article which has been shared by many social media users, claimed the Yoruba language has been adopted by Brazil as its official language. It was stated further that the government has introduced the compulsory study of African History and Yoruba language in Brazil’s primary and secondary schools.

The article was credited to a statement purportedly made by the Brazilian minister of culture, Dr Sérgio Sá leitão.

EaglesForeSight, an online medium, published the article on November 11 with the headline “Breaking: Brazil Adopts Yoruba Speaking As The Country Official Language.”

Another online platform, AkedeOyo, published the article on November 13 with the headline,“Brazil Adopts Yoruba As Its Country Official Speaking Language.”

According to these articles, the minister who was said to have given a speech at the University of Sao Paulo said: “The inclusion of African History and Yoruba Language in the curriculum would help bring the closeness of the African Brazilian people to their roots and thus encourage the understandings of the language among other important languages in Brazil apart from Portuguese which is the official language.”

Findings by Dubawa revealed that several other online platforms published this article and many social media users have reshared the claim.

Dubawa first noticed that the articles shared by these online platforms are the same with the majority claiming the information was passed to them in an exclusive interview with “the Brazilian minister of culture, Dr Sérgio Sá leitão, at the weekend in Brazil.”

Dubawa then conducted a Google search and found that the information is not new and has been circulated several times since 2018 by several online platforms, as seen here.

In 2019, the AFP Fact Check, carried out a report when the claim resurfaced. In the report, Dr Sérgio Sá leitão was addressed as a former minister of culture.

Dubawa searched further to know why that is so and found that the ministry of culture was dissolved in January 2019 by the president, Jair Bolsonaro.

According to the report by AFP, a spokesman for Brazil’s special secretary for culture said the former minister had not made such a statement. “This news item is false,” he said.

To further verify this claim, Dubawa reached out to Brazil’s foreign relations ministry via its website but it is still awaiting a response.

He further explained that “Brazil is one of the countries which received more African black slaves in the world, about 5.8 million of the 12.5 million ‘trafficked’ from Africa to the Americas. In Brazil black slavery stands from 1535 to 1888, and of course a lot of culture was brought to the country by Africans. One of these is the afro-religions and the Yoruba language in its rituals.

“Especially in Bahia, the Brazilian “blackest” state today, many people use Yoruba words and ‘Candomblé’ religious leaders speak in Yoruba during the rituals.

“So, Yoruba is part of the historical and cultural heritage of Brazil; it is recognised by law in two large Brazilian cities, Rio de Janeiro and Salvador but was never an official language in Brazil.”

Another journalist, Kaíke Nanne, described the claim as “fake news.”

“This is a fake news. There is no possibility that Yoruba can replace Portuguese as the official language. Yoruba is spoken by very few black communities and has some words used in Candomblé cults. It’s just that,” he said.

What is Brazil’s official language?

Portuguese is the official and national language of Brazil and it’s also the most widely spoken language in the country.

According to world population review, there are about 228 languages spoken in Brazil which include Portuguese and 11 other foreign or immigrant languages and 217 indigenous languages.

The claim that Brazil has adopted Yoruba as its official language and that the language will be included in primary and secondary schools curriculum is false. The content of the article published by these online platforms is not new and has been recirculated several times in the past.