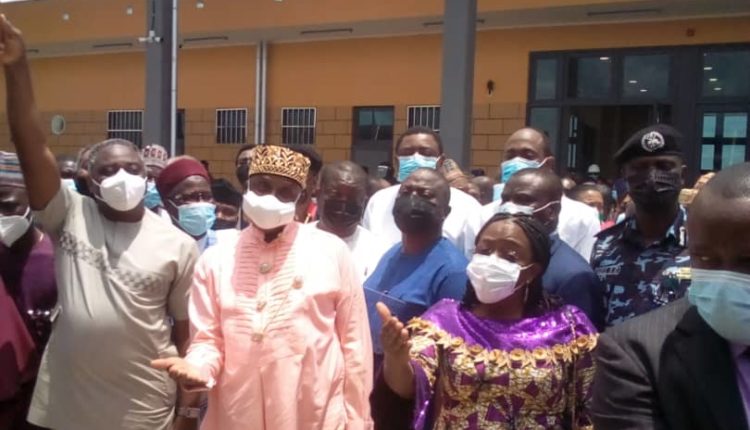 Minister of Transportation, Mr Rotimi Amaechi and the President-General of Ijevwu community in Udu Local Government Area of Delta State, Chief Notoma Godwin, on Friday disagree over the naming of Ijevwu Railway Station.

The event was the formal kick-off of freight services on the Warri-Itakpe Standard Gauge Railway Line by the Nigerian Railway Corporation held at Ijevwu Railway Station.

Chief Godwin had, in his goodwill message at the event, taken a swipe at the Federal Government for not naming the railway station after an eminent and worthy Urhobo indigene.

Not done, he further went ahead to kick against identifying the location of the railway station as Warri rather than Ijevwu which he said is in a different local government from Warri.

“The name of the railway station should reflect the sensibility of the people of Udu. Udu has its own monarch just as Warri has its own.

“Our sensibility should not be taken for granted. And we are making this submission for the sake of posterity,” Chief Godwin added.

Responding, Amaechi, who abandoned his prepared speech, warned against those misusing the platform to draw ethnic blood and create tension where there should be none.

“We will not allow anybody to use primordial sentiments to incite the youths to foment trouble whatsoever over location of well-intended government projects.

“After all, people from the immediate catchment area are ultimately the highest beneficiaries, socially and economically,” Amaechi said.

Not done, the minister warned that government would not overlook a situation where communities degenerate to rancour against one another rather than rallying round themselves to secure and take ownership of developmental projects in their areas.

He rejoiced at the official kick-off of haulage of NNPC line pipes imported for the construction of 614 kmx40″ Ajaokuta, Kaduna, Kano (AKK) GAS pipeline project inaugurated since June 30, 2020, saying it would help to cushion the haulage problems of the corporation.

In spite of the huge investment in the water sector by the government and international organisations, water scarcity has grown to become a perennial nightmare for residents of Abeokuta, the Ogun State capital. This report x-rays the lives and experiences of residents in getting clean, potable and affordable water amidst the surge of COVID-19 cases in the state…Urhobo leader disagree  Urhobo leader disagree

The Lagos-Ibadan railway was inaugurated recently for a full paid operation by the Nigerian Railway Corporation after about a year of free test-run. Our reporter joined the train to and fro Lagos from Ibadan and tells his experience in this report…Urhobo leader disagree  Urhobo leader disagree