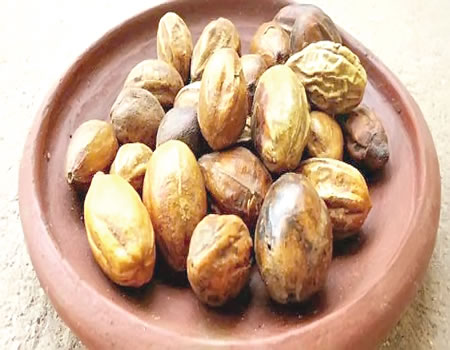 Strong pain killers and topical medications are commonly used to treat exercise-related pain, although some evidence suggest that their long-term use is associated with potentially serious adverse effects.

Now, experts say that an alternative that could be tried for such knee discomfort is the fruit of Terminalia chebula, what is commonly referred to in English as Almond tree.

A wide variety of populations are subject to exercise-related joint pain, especially knee pain. For example, this is true of competitive swimmers, workers whose jobs involve significant outdoor activity, and overweight and obese individuals.

Almond fruit is useful for its purgative, laxative, astringent and rejuvenating properties. The fruit is famous for its anti-diabetic, anticancer, antimicrobial, anti-inflammatory and anti-oxidant properties and is called as King of medicines in Tibet.

Chewing almond fruit enhances digestion and clears and cleanses the bowel. It is also used to treat a cough, cold and asthma. It promotes bowel movement and relieves inflammation and it can also be used as a mouthwash and gargle.

The participants in this study that ran over a 14-week period were free of medical conditions but with knee discomfort associated with exercise or physical activity.  Some received  Almond fruit extract test capsule while others received a placebo.

They were randomised into one of three parallel groups. At each visit, measurements of joint health and function, as well as functional capacity were performed.

Determination of self-reported feelings of joint health, comfort, mobility, and function were the primary outcome measures at every study visit. Also, biomarkers of safety were measured during the screening visit and again following 12-weeks of supplementation.

The results reveal several important findings, including significant improvements in modified-Western Ontario and McMaster Universities Arthritis Index (mWOMAC) subscales (discomfort, stiffness and function). It was in the 2017 edition of the BMC Complementary and Alternative Medicine.

However, the researchers said that no difference was noted between the lower dose and the higher dose of Almond tree fruit extract test capsule in improving knee comfort and function, indicating its effectiveness is not dose dependent.

The study’s finding they said was also congruent with previous information on Almond tree fruit extract in patients with moderate osteoarthritis and pain at rest.

According to them, future studies will need to explore even lower doses since a true dose-response in healthy subjects may be lower than 250 mg twice daily, as well as investigate other applications such as higher intensity exercise-induced muscle and connective tissue damage.

Finally, use of Almond tree fruit extract in conjunction with other nutraceutical ingredients, as part of multi-ingredient dietary supplement preparations with complementary mechanisms of action for joint and musculoskeletal health and function should be investigated.

Meanwhile, several studies have revealed that Almond tree fruit may have the ability to lower high cholesterol. A study published in the 2010 issue of the Journal of Advanced Pharmaceutical Technology & Research showed that this herb helped in reducing the total cholesterol levels in mice.

The cholesterol lowering properties of Almond tree makes it a potential remedy for lowering the risks of heart diseases, strokes and other diseases that may be brought about by the accumulation of cholesterol in the blood vessels.

A study issued in the Oral Health & Preventive Dentistry, found that using a mouthwash containing Almond tree fruit extract may be helpful in preventing dental cavities.

The study attributed its cavity preventing effect to its ability to reduce the levels of bacteria in the mouth that are associated with the development of cavities.