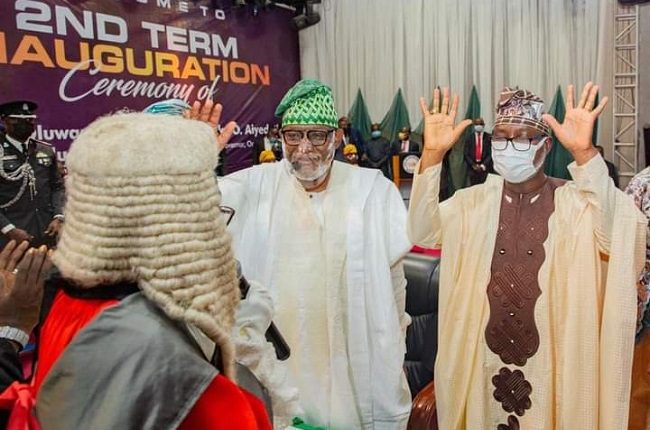 Ondo State Governor, Mr Rotimi Akeredolu has been sworn-in for a second term in office, along with his new deputy, Hon. Lucky Ayedatiwa, with the governor promising to consolidate on his first-term achievements.

The Oath of Office was administered around 10:45 am by the Chief Judge of the State, Justice Oluwatoyin Akeredolu to the governor and his deputy.

Speaking at the inauguration, Akeredolu who promised to give priority to the security of lives and property of the state, advocated for the establishment of state police, saying, every state must be allowed to secure its space.

According to Akeredolu, “We have been relentless in advocating for the establishment of State Police. There can be no other way if we are indeed serious about securing lives and property. 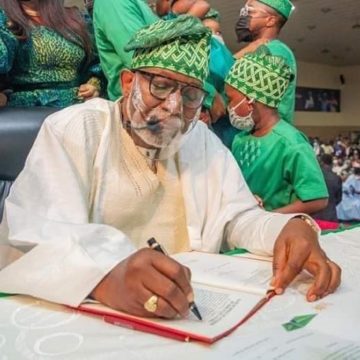 “We are of the firm belief that it is high time the Police central command became devolved to the federating units for effective monitoring.

“It is this incongruity which propelled the South West Governors to form a Regional Security Network code-named Amotekun. The ultimate is to convince others to understand that the devolution of authority is inexorable. Every State must be allowed to secure its space.”

Akeredolu noted that the South-West Security Network, Amotekun has done well within the short period of its existence, working within the law establishing it, saying its operations and successes recorded justify its establishment.

The governor however assured the people of the state that his administration will focus on the development of agriculture and youth empowerment through entrepreneurship.

“We intend to revolutionise agriculture taking it beyond theory and anchoring all expectations on practicals. We will not depart from the trodden path which earns us affection and deep reverence from the citizenry.

Thus in the next four years, we will be pursuing a totality of repackaged programmes christened “Redeemed” which include: rural and agricultural development, educational advancement and Human Capital Development.

“We will also give priority to the maintenance of law and order for adequate security, Energy, Mining and Sustainable Industries, digital resolution and entrepreneurship.”

Akeredolu commended and appreciated other party members who contested the party ticket with him for their support and said “all of us participated but the people are the real winners. I salute their sense of patriotism for joining a common cause for the benefit of our people. 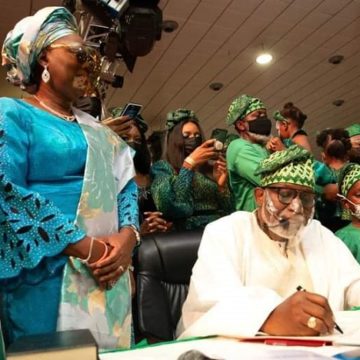 “It is our fervent hope that this engagement will continue for optimum service delivery to our people. The fierce contestations witnessed before the conduct of the primaries were meant to deepen our choice of deliberative governance.

“The system is better for it. All those who participated in our emergence. Brothers contested to give our people the best. We must come together to ensure that their interests are best served.

In attendance at the inauguration which took place at the International Event Center, The Dome, include governors of the APC in the Southwest region, including the Chairman of Nigeria Governors’ Forum and Governor of Ekiti State, Kayode Fayemi; Governor of Lagos State, Babajide Sanwoolu; Governor of Osun State, Gboyega Oyetola; Governor of Ogun State, Dapo Abiodun; and Governor Obaseki of Edo State.

The British Parliament at the Westminster Hall held a debate on ‘e-petition 554150, relating to Nigeria and the sanctions regime’ on Monday. The government of the United Kingdom has however responded…Akeredolu sworn-in  Akeredolu sworn-in

The surprise visit made on Friday night by the leaders of the ruling All Progressives Congress (APC) to former President Goodluck Jonathan at his residence in Abuja triggered a stir in the major political camps, resulting in at least four possible theories..Akeredolu sworn-in