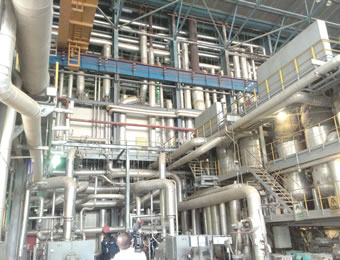 The Federal Government on Tuesday said that, efforts are in top gear to ensure that Ajaokuta Steel Company Limited, ASCL is fully functional, saying that with rail track production in ASCL, more than $5 billion imports of rail for railway expansion and maintenance would be saved per annum.

Minister of state  of state for Mines and Steel Development, Hon. Bawa Bwari who appeared before the House of Representatives Committee on Steel led by Hon. Idrisu Lawal Muhammad noted that putting Ajaokuta to work is dear to the federal government.

This is coming just as the House committee demanded from the minister details federal government action plan to truly revive the steel company.

Reeling out benefits of a vibrant steel sector in Nigeria, the minister said that, if ASCL is working, in construction industry, imports of over 4 million tons of rolled steel products and over 12 million tons of other steel products at the present rate will stop, leading to savings of several billions in foreign currency per annum.

In terms of employment generation, the minister informed the lawmakers that, over 10,000 staff would be required directly in the first phase in addition to about 500,000 indirect employment opportunities from the downstream and upstream industries that would naturally come on stream with the commissioning of Ajaokuta.

However, the committee in its assessment of what the minister said, asked the minister to furnish it with relevant documents to show that federal government was truly committed to reviving the steel sector.