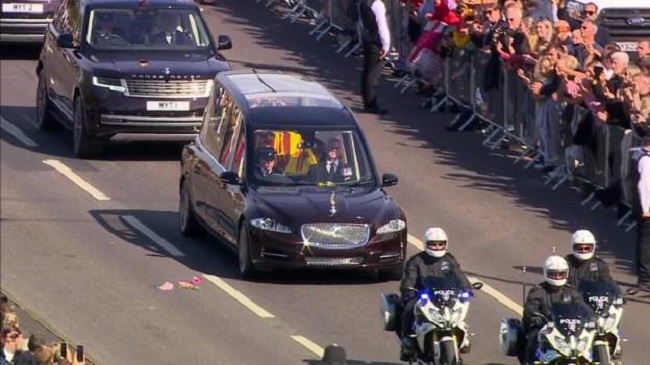 Members of the public in Britain have gathered in their thousands along the route the Queen’s funeral procession is taking to Windsor.

Crowds watched as the state hearse passed through London, with some people throwing flowers in the direction of the convoy.

This was after the funeral service was held for the Queen at the Westminster Abbey where world leaders, royals and other eminent people paid their last respect to her.

Around 800 guests are expected – so it’s a smaller-scale event than what we’ve just witnessed in Westminster.

Later in the evening on Monday, the Queen will be buried in a private family service.

As the vehicle left Wellington Arch, members of the parade gave a royal salute and the national anthem was again played.

The King and Queen Consort and other senior royals travelled behind the hearse carrying the Queen.

Who Is Ethan Nwaneri, English Premier League’s Youngest Player Ever?

Nigerian born Arsenal wonderkid, Ethan Nwaneri, made history on Sunday when he became the youngest player ever to play in the English Premier League after coming off the bench for Fabio Vieira in a 3-0 win against Brentford at just 15 years and 181 days old…

Early Sunday morning inferno reportedly engulfed a building of about seven flats in the Ilorin metropolis, Kwara State. Tribune Online gathered that the incident that happened at about 2:58 am was caused by a power surge…

Two-term Edo State governor and former national chairman of the All Progressives Congress, Adams Oshiomhole, has claimed that the presidential candidate of the Labour Party, Peter Obi, lacks the capacity to address the security challenges facing the country…

Why Unethical Practices Are Rife In Insurance —Ogunbiyi