Activists: Conscience of the nation 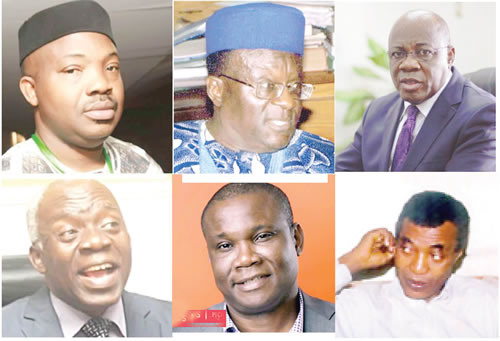 As the nation grieves over the demise of two activists: Yinka Odumakin and Innocent Chukwuma, SUNDAY ADEPOJU takes a look at the place of activists in the chequered history in the last few years in the quest to ensure justice, equity and fair play in the country.

The cold hands of death were at it again in the country. Within 48 hours, those hands, like bees, stung the nation’s pro-democracy and human rights community, snatching two precious souls: Comrades Yinka Odumakin and Innocent Chukwuma. While alive, the two roared like wounded lions, especially from the era of military dictatorship to the political dispensation. The antecedents of the duo fired the engine of keeping the system on guard, constituting the conscience of the nation. In collaboration with others with similar aspirations and convictions, Odumakin and Chukwuma dared the sharks and leopards in their insatiable appetite to systematically weaken, incapacitate and destroy the society.

For Odumakin, he traversed many plains in the quest to checkmate the termites and locusts that fed on the state. From his days as a student union in the university through his professional career and practice as a journalist to his deep involvement in prodemocracy and human rights activists, he was a dogged fighter, unapologetic apostle of revolutionary thinking and pragmatic personality. Where angels were afraid to tread, Odumakin entered without looking back even in the face of grave danger. He amply displayed such courage, tenacity of purpose and aggression during the prolonged and bitter struggle against military autocracy in Nigeria, laying down his life during encounters with fully armed government security agents. Of course, his freedom and rights were encumbered, trampled upon and curtailed through arrests, detention and other forms of humiliation and dehumanisation. Yet, he was undaunted, unbowed and non-dispirited in principle, beliefs and philosophy about life and essence of human existence.

Right from the period of civil society groups to the era of the National Democratic Coalition (NADECO) and the sustained push by the pan-Yoruba organisation, Afenifere for a just and equitable society, Odumakin showed an almost unparallel capacity and uncommon commitment to the project of making Nigeria work based on a just, fair and not skewed political stricture. As the spokesman of Afenifere, he buoyed the battle and crusade for restructuring and balance of power as opposed to a master-servant relationship in a supposed federal arrangement. As the publicity secretary of Afenifere, Odumakin made the organisation, its altruistic agenda on the critical National Question, the euphemism for factors impeding Nigeria’s attainment of statehood and nationhood difficult, central in national discourse and search for solution. His voice and role in other progressive mass-based coalition of ethnic nationality platforms was irresistibly vehement, coordinated and focused at the object. His courage and determination to hit the nail on the head and guts to hit the iron when it was crimson red made him the undisputable arrowhead of the crusade against injustice and impunity in the country.

But Odumakin never claimed to be infallible; he never failed to acknowledge what he regarded as his own idiosyncrasies. In separate tributes, many have underscored the factors that made Odumakin an icon and enigma and shining star. One of his main constituencies, National Consultative Front, which declared seven days of mourning in honour of the duo, said they were able to raise the bar of the current struggle against enslavement by the political class and the economic elite and carved a much for themselves because of their doggedness and progressive inclinations.

The life and times of Chukwuma is also full of major strides in the struggle for a better society. From the humble beginning as a leading voice and force in the struggle for liberation from neo-colonial masters and feudal lords in the country, he rose gradually to stardom. With an awesome intellectual prowess, legal erudition and leadership acumen, Chukwuma became a powerful influence and factor in the pro-democracy and human rights campaigns. From birthing Centre for bLaw Enforcement of Education in NIgeria (CLEEN), nurturing and strengthening it to lead, coordinate and executive definite agenda, 65-year old Chukwuma moved phenomenally on the ladder of activism, recording global recognition and fame, culminating in his emergencies as the West African head of  Ford Foundation. An official statement by Professor Etannibi Alemika, on behalf Board of Trustees, CLEEN Foundation, described Chukwuma as a patriot, who, throughout his years, struggled for a Nigerian nation where peace, justice and development are attained and sustained. He was one of the students within the National Association of Nigerian Students (NANS) platform that opposed to the arbitrary powers of the military rule in the 1980s. He continued the struggle as a staff of the Civil Liberties Organisation (CLO), where he led research and advocacy on police reform. A close ally and activist, Chidi Odinkalu, said his friend of more than 36 years, Chukwuma, is a “man of decency.”

Their deaths are instructive in many respects. They mark yet a phase in the struggle for emancipation of the critical mass of the populace, always at the mercy of the glutinous elites. Their demise also underline the agonising state of infrastructure, especially healthcare in the country as the Coronavirus pandemic has further exposed the deceit of the establishment in its repeated promise to raise standard, sufficiently fund and constantly upgrade the heath sector. Perhaps, equally fundamental on the death of the two activists is the reality about the vacuum likely to be created by their exit. They may have shared a similar aspiration and ideology with their colleagues in the struggle while alive, definitely certain traits were bound to be peculiar to them and their mien.

The history of other leading human rights and pro-democracy crusaders underscores such arguments by many observers. No other activist in the mould of Chief Gani Fawehinmi has emerged since he passed on. Neither has another Alao-Aka Bashorun emerged. So also is the petrel, Dr Tai Solarin, the renowned educationalist that was a torn in the flesh of the establishment. Each of them had their unique selling points, charisma and style. For example, even though he constituted an incontrovertible factor in partisan politics, late Alhaji Balarabe Musa was on the class of his own in the crusade for a just society. Ditto to the late Dr Beko Ransome-Kuti, who was as gentle as an eel but uncompromising on principles of civil rights and justice. Dr Arthur Nwankwo of the Eastern Mandate was another distinguished egg head that threw in all he had into the struggle until he breathed his last in a similar manner another Trojan, the late Uche Ubani. The battle for a just system is still being spearheaded at different fronts, shades and colours by two Senior Advocates of Nigeria (SAN): Dr Olisa Agbakoba and Mr Femi Falana.

Like Beko Ransome-Kuti, Fawehinmi, Alao Aka-Bashorun, Uche Ubani and other uncompromising activists of blessed memory, Odumakin and Chukwuma came and fought a good battle to help humanity.  But, given the grueling state of the nation almost 22 years after it restored civil rule, the struggle definitely continues, ostensibly to honour the departed souls.