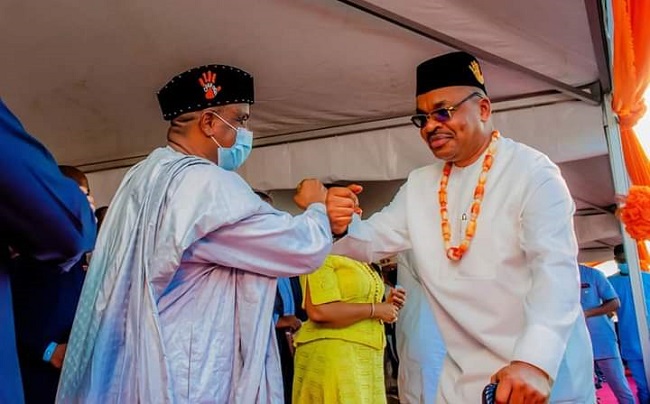 All the governors of the People’s Democratic Party (PDP) in the country firmly trust that the country will not fail under the party’s watch if it is voted into power in 2023.

The Chairman of the PDP-Governors Forum (PDP-GF), Gov Aminu Waziri Tambuwal of Sokoto State made this observation on Sunday at the reception ceremony of the two new airbuses (SU-GFA and SU GFD) A220-300 added to the fleet of Ibom Air by the Akwa Ibom state government in Uyo, Akwa Ibom state.

This is contained in a statement signed by the special adviser on media and publicity to the governor Muhammad Bello and make available to newsmen in Sokoto.

The statement said according to Tambuwal, the demonstration of this is evident in the manner the PDP governors are delivering the dividends of democracy in their respective states by “working on infrastructure development.”

He said “I am very proud of the PDP governors. I believe we will continue to do well in our respective states.”

Bello further revealed that turning to the delivery of the aircraft he commissioned, Gov.Tambuwal said he and the PDP “are very well pleased with Gov Udom Emmanuel,” just as he congratulated him “for the works he has been doing in all facets of life in the state.”

He noted that “in the Nigerian Constitution, Aviation is on the exclusive list,” but since the inception of the All Progressives Congress (APC) administration, the government has been talking of a national carrier that has not materialized, whereas the PDP-led Akwa Ibom state government has achieved the feat.

In his remarks, Gov Udom Emmanuel of Akwa Ibom described the purchase of the aircraft as “the latest development in the aviation sector in this part of the world.”

“This s a milestone in the aviation industry. Never has a state owned an airline in the whole of Africa,” the governor, whose state Ibom Air already has a fleet of five aircraft, emphasized, pointing out that his administration is being “favoured by God to do what we took an oath to do- sparing nothing to develop our people.”

He revealed that the state government, which owns 100% of Ibom Air, is going into the big business of getting ten more aircraft before leaving office, saying: “there will be a time when Nigeria will be in distress and Akwa Ibom will raise its hope.”

He also added that there will be a time when the APC will fail, “as it is already doing; and, the PDP will take over.”

In his goodwill message, Gov Ahmadu Fintiri of Adamawa state applauded his counterpart, saying: “This is unprecedented history-making by Gov. Udom for growing the aviation sector and unlocking the already locked economy of the nation.”

Other dignitaries at the reception were the governors of Enugu and Rivers state, Hon. Ifeanyi Ugwuanyi and Ezenwo Nyesom Wike; the Deputy Governor of Zamfara state, Barrister Mahdi Aliyu Gusau and the Director-General of the PDP-GF, C.I.D. Maduabum.