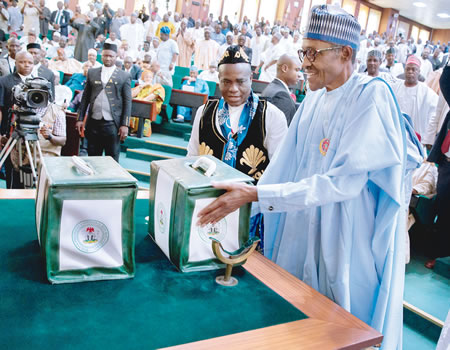 PERHAPS the most resounding controversy within the polity today is the recently announced approval by the Nigeria Governors Forum (NGF) of the release of $1 billion from the Excess Crude Account to the Federal Government to prosecute war against Boko Haram insurgency. The main debate revolves around the legal plank upon which the NGF’s alleged approval rests and, more importantly, the purity of the motive of the Federal Government, the beneficiary of the fund. The situation is hardly helped by the seemingly discordant tunes from stakeholders who are in a position to clarify issues around the fund.

The Edo State governor, Godwin Obaseki, who addressed the press on behalf of his colleagues, claimed that the fund was to assist the Federal Government  to procure weapons. However, the chairman of the NGF, Abdulaziz Yari, said that the money was meant to appreciate the Federal Government, whatever that means. Again, Governors Ayodele Fayose of Ekiti State and Emmanuel Udom of Akwa Ibom State, in a move that broke ranks with their colleagues, claimed that they were never part of the plan. And indeed, all the local government councils in Ekiti State have reportedly sued the Federal Government. The vice-president, Yemi Osinbajo, also joined the fray, announcing that the money was not to buy weapons alone but also to attend to security and related issues across the country. The big question is, who is telling the truth?

The imperative of the pronounced purpose of the fund is hardly in contest as the security and welfare of the people is the primary purpose of government  as enshrined in the 1999 Constitution of the Federal Republic of Nigeria (as amended). That the Boko Haram insurgency still rages despite the official claims regarding its decimation is public knowledge. Therefore, Nigerians, including the political elite, appreciate the need to continue to fund the war. But then, massive funds have reportedly been channeled into fighting the war since it broke out without commensurate results. Rather, what has filled the public airwaves and court rooms are allegations of unprecedented sleaze and malfeasance by handlers of the funds.

In other words, the current worry is not really about legality but the doubtful intended application of the fund by the Federal Government which, in a sense, provides justification for the current interrogation. This controversy succinctly exemplifies the level of distrust that reigns among the political elite and ordinary Nigerians. Members of the political elite do not trust one another and they have squandered the goodwill and trust that Nigerians used to repose in them owing to the litany of disappointments and numerous cases of misplaced trust in the past.

The questions arising from this distrust are legion. For instance, the Federal Government is being questioned for passing through the back door, as it were, to secure approval for the release of the $ 1 billion fund. There is also the argument as to whether any money in a federation-related account could be applied for any use without being appropriated by the National Assembly. There is also the issue of the illegality of the NGF’s approval of the release of the fund without making recourse to the Houses of Assembly and local councils for prior approval or at least formal concurrence. It will be recalled that in a similar circumstance, the administration of former President Olusegun Obasanjo sought the consent of the state assemblies and local government councils on his power project and foreign debt issues.  Against this backdrop, the unilateral decision of the NGF to approve the release of the fund belonging to the three tiers of government is patently wrong and smacks of impunity, especially because it failed to draw any lesson from precedent.  It is clearly not the place of the NGF to legislate on money.

While it is risky and indeed inadvisable to subject issues of state security to politics, open debate and legalism, the Boko Haram insurgency cannot and should not be allowed to continue to be a subterfuge for the plundering of state resources. It is believed in some quarters that the war has become a cash cow feeding the rapacious cravings of its political and military prosecutors for filthy lucre. And one way to ensure that this does not happen again is to begin, as is being done now, to demand for transparency and accountability on further resources to be deployed to fund the protracted conflict. The simple caveat is that all parties are required to approach the advocacy for transparency and responsible governance with all sense of responsibility and altruistic motives.

The destruction occasioned by the Boko Haram war is not limited to lives and property; it affects the psyche and the economies of the traumatised survivors. Thus, if additional funding is what is required to achieve decisive victory, it should be done. The Federal Government has in fact stated that the war against Boko Haram would be hampered without the release of the money. But we strongly call for increased levels of prudence, efficiency and accountability in public resource management, especially in situations of emergency.

The ceaseless container deaths in Lagos