Your contributions will be rewarded, Bello assures support groups 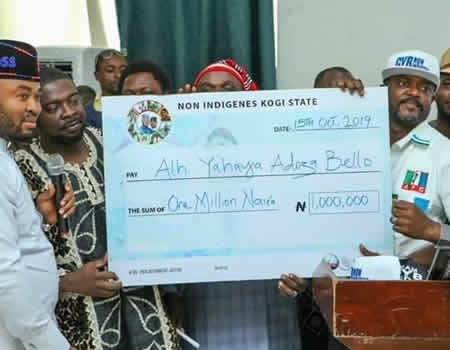 Kogi State Governor, Yahaya Bello has commended the various socio-political groups for their continued support of his re-election bid with campaign materials and monetary donations assuring that such gestures would be rewarded.

Governor Bello gave the commendation and assurance on Tuesday while receiving the leaders of Non-indigene in Kogi State, who presented to him a certificate of endorsement and cheque of one million naira, donated towards his re-election campaign.

The governor noted that non-indigenes in the state from diverse ethnic groups play critical social, economic and political roles which have been very beneficial to the confluence state and as such would not be taken for granted.

He noted that the state as a result of its strategic and gateway location host several communities and has ensured continued peaceful co-existence between all and sundry.

The governor also opined that Kogi State which now was a safe place has allowed non-indigenes, their businesses and endeavours thrive without being discriminated.

Governor Bello who was represented at the event by his Chief of Staff and running mate, Edward Onoja, however, restated his government commitment to continually uphold the principles of fairness, equity and justice which assures every resident of the state of equal treatment and opportunity to thrive. The Governor pledged to remain a detribalised leader committed to good governance.

Presenting to the Governor, a specially designed certificate of endorsement and a cheque of N1m in support of his aspirations for a second term in office, the group expressed satisfaction for Governor Bello’s huge developmental strides and for carrying them along in government, while urging him to do more.

Speaking during the event, Moses Okezie-Okafor, a lawyer from Anambra State who is the highest-ranking non-indigene in Governor Bello’s administration applauded the Governor’s pan-Nigerian outlook, effective leadership and bridge-building abilities. Barr. Okezie-Okafor who was appointed Director-General, Research and Development and head of the New Direction Blueprint Team urged all non-indigene in Kogi State to give maximum support to the administration of Yahaya Bello And His re-election bid.