The Ondo State government has begun the exploitation of bitumen deposits in the state, breaking an age-long lack of willpower by preceding governments in the state to do so. HAKEEM GBADAMOSI writes on the takeoff of the project, its challenges and prospects both for the state and the larger Nigerian economy.

The dream of exploitation the expansive deposits of bitumen in Ondo State is becoming a reality as the exploration of the material is set to commence before the end of this month. Nigeria is greatly endowed with large deposits of bitumen in the southern region of the state, which was reported to have a proven reserve of about 42.47 billion tons of bitumen, estimated to be the second largest deposits in the world but yet to be exploited for economic purposes.

The administration of former Governor Adebayo Adefarati gave priority to the project in 2000 and committed enormous human and material resources to the implementation of the bitumen project. But it never saw the light of the day as successive administrations after him did not demonstrate much verve towards the project until the Rotimi Akeredolu administration decided to resuscitate it.

At the inception of his administration, Akeredolu had declared that the bitumen project was close to his heart, and that the product which the state has in abundance would be exploited to bring about the desired change to the economic fortunes of the state, with the concomitant economic growth through an employment framework for sustainable development for Nigerians.

He expressed optimism that apart from generating huge income for the state, the exploitation of the huge bitumen deposits in the state would contribute largely to tackling unemployment and also boost the economy of the ‘sunshine state.’

Nigeria is reported to be importing over 500,000 tons of asphalt per annum with the nation spending billions of naira doing this.

It was evidently clear then that the Akeredolu administration meant business about improving the fortunes of the state through its bitumen deposits as the government through the state’s Bitumen Exploration and Exploitation Company (BEECON) through the Development and Investment Agency (ONDIPA), in May 2018, met with “private firms which showed interest in partnering with the state government in the exploration and exploitation of the resources.

The jinx was finally broken in July when the modular exploitation of bitumen commenced in the state when an indigenous firm, South West Bitumen Limited, moved to site, showing its readiness to bring the dream to reality.

Nigerian Tribune gathered during a visit to the site at Lamidifa in Irele Local Government Area, that the state government and the South West Bitumen Limited would not only work together but ensure that the prospects in the enterprise are realised.

Speaking with the Nigerian Tribune, the representative of Southwest Bitumen Limited, Oluwatominiyi Adeiya, disclosed that the firm had commenced a modular process by employing German technology in the exploitation of the bitumen, just as he added that the firm would deliver between 20,000 and 50,000 tons of bitumen monthly when operation begins fully.

According to him, the firm has secured a 25-year renewable Operational Mining License for the exploitation of the mineral deposit at Lamidifa and earth-moving equipment like bulldozers, excavators and wheel loaders have been brought for the mining.

Adaiya explained that unlike exploitation of petroleum, the bitumen in the state is in tar sand which can be excavated from the top soil and taken to the  yard for processing. 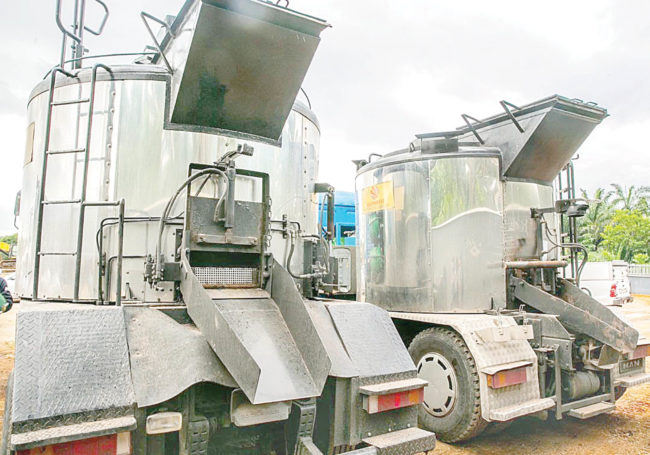 “This is a pilot case. It is a modular exploitation. What we have in Nigeria is tar sand bitumen, not like in petroleum when you are tapping from it to get bitumen. We are not getting it from the cracking of anything. What we need to do is to heat it with the required technology,” he explained.

Also speaking, the mining engineer at the yard, Wilfred Akinyeke, added that the firm would deliver 20 tons of bitumen monthly at the first instance, insisting that when it is stabilised, an output of 50,000 tons or more will be realised on a monthly basis. He said bitumen exploration would provide more than 30,000 direct jobs in the state when full operation commences.

The state’s Commissioner for Information and Orientation, Donald Ojogo, told Nigerian Tribune that the governor Rotimi Akeredolu administration has been pursuing the exploitation of bitumen and the establishment of the deep sea port.

According to him, bitumen was discovered in the state 1904 but nothing was done on it due to the expensive cost of exploration, which government alone could not invest in. He, however, stated that bitumen exploitation has started taking shape stressing that this is the first time any government in the state has committed resources in the exploitation.

“Mere sighting the equipment, one would think it is for construction unless one has the technical knowledge to understand their functions in mining. What they are trying to do is a pilot project. This is the first time any company will expend so much on this project. This is the first time a company would take the licence and efforts and commitment would be seen, unlike in the past when people took the licence and went home to sleep.

“You know they cannot just jump over several fences; we are almost sailing through our investment destination. As a state, what we require is the bitumen exploitation and the deep sea port. We are into this now and it is very reassuring that Governor Akeredolu will not rest until this is achieved.

“I know with what they have done, more and more firms will be ready to invest in this. It’s not easy to deploy this kind of technology and equipment. In a matter of six, seven months, we will be getting large production of bitumen from here,” Ojogo said.

Also speaking on the feat recorded by Akeredolu’s administration, the Special Adviser to the governor on Investment and Development, Mr. Boye Oyewumi, described the development as a statement of result.

According to Oyewumi, the intention of the Akeredolu administration is to make Ondo State the capital of bitumen exploitation in Africa, noting that with the takeoff of the exploration by the firm, the barriers have been broken. He said this is an attestation that the government is ready to do what others thought was impossible.

He commended the Federal Government for the help rendered in the course of moving the equipment and assured Southwest Bitumen Limited that Ondo State is the most conducive place to do business.

“With bitumen being produced in Ondo State, the Federal Government will ensure that none of its road contractors imports asphalt. I am sure that many state governments will prefer to buy from Ondo State because it will definitely be cheaper here than importing from outside the country.

“Whilst attention over the years has been on oil and gas, this government is willing and ready to exploit its bitumen reserves in a sustainable way, particularly in the area of providing asphalt for road development. It is estimated that over 90 per cent of the minerals in Ondo State are unexploited and unutilised.

“Gone are those days when any government would rely on oil and gas alone. I am happy to inform you that in Ondo State, we are aggressively driving our non-oil related industries,” he said.

Many residents of the state have been commending the efforts of the state government in making the project a reality, especially the people of the southern senatorial district. A resident, Akinbami Jacob, told Nigerian Tribune that the host communities and the district in general would benefit immensely through rapid development as well as through direct and indirect employments.

He said “the commencement of bitumen exploitation will usher in a lot of developments to our area. A lot of people have been paying lip service to this, but I am happy it came to fruition during our life time.”

Jacob, however, advised the state government to give priority to the people of the area, especially youths, in the provision of employment.

A community head, Chief Abel Okuwayi, speaking with Nigerian Tribune urged the government to ensure that due process is followed, and all affected communities are taken care of. He urged youths in the various communities to cooperate with the state government to enable them benefit from the exploration.

“I have heard about this bitumen since I was in primary school. I only urge the government to be sincere with the exploitation and develop the communities as promised. We are also appealing to our youths to shun all forms of violence and vandalism of equipment of companies that will come to our communities to explore bitumen,” he urged.

A stakeholder, Chief John Oyedeyi, said that the government must sign a Memorandum of Understanding (MOU) on how royalties would be paid to all communities should their cash crops and farm produce get affected by the exploration. He also advised that government should ensure that youths are given rewarding employment so as to avoid the recurrence of the Niger Delta youths’ restiveness over crude oil exploration.

It is evidently clear that the present administration has broken the jinx that had bedeviled the development of bitumen resources in the state for decades. The fear of some residents of the state, however, is that the state government would not abandon the project.

They stressed the need to ensure the sustainability of the bitumen project after it must have gotten to the level of commercial production and the generation of massive employments for the people.