Will rehabilitation of Owena Dam ever be completed?

The South West
By HAKEEM GBADAMOSI On Sep 5, 2017
Share

The Owena Dam in Ondo State is one of the major dams in South-West region. The dam was designed to supply water to the people of the six local government areas in the Central Senatorial district of Ondo State but the dream was thwarted as succeeding governments in the state failed to make it a reality. HAKEEM GBADAMOSI after a visit to the dam reports his findings.

Across the globe, water is a necessity in everyday life and its usefulness cannot be over emphasised. This was the reason the Federal Government in 2008 embarked on the rehabilitation of the Owena water dam to provide drinkable water for the people and residents of Akure and its environs. However this laudable project failed to see the light of the day, with succeeding governments in the state trading blames over the delay in the rehabilitation of the dam.

Owena dam, in Igbaraoke, Ifedore Local Government Area of Ondo State was designed to be a major source of domestic water supply to the people of Ondo, Akure and its environs. It was constructed in 1966 and can be regarded as one of the biggest reservoirs in the south west region of the country. However the dream of the residents of Ondo to have access to potable water through the dam has remained a mirage.

A federal lawmaker, Afe Olowookere, representing Akure South/North at the House of Representatives, recently accused the immediate past government in the state over the delay in the completion of the water dam. According to him,  the rehabilitation project which was conceived under the administration of the late governor Olusegun Agagu, was abandoned by former governor Olusegun Mimiko despite having attained a 70 per cent stage of completion, saying there was no major reason the job should be abandoned despite the huge amount of money expended on the project.

“This is a project that started under the late Dr.  Agagu’s administration and has reached 70 per cent completion level.Since the dam was constructed by the federal government, the water treatment plants have been constructed, thus remaining the delivery through reticulation by the state government to towns and villages in Ifedore, Akure South and North, Idanre and Ondo at the central senatorial district,” he said.

Speaking while former governor Mimiko was in office,  the state’s former Commissioner for works, Gboye Adegbenro, said the N14 billion water reticulation project awarded at the twilight of the administration of Agagu lacked proper design, lamenting that the project for which the immediate past administration had paid contractors 50 per cent sum, amounting to N7billion, failed to satisfy basic requirements, saying there was no way projects of such magnitude could be executed without proper route survey map. 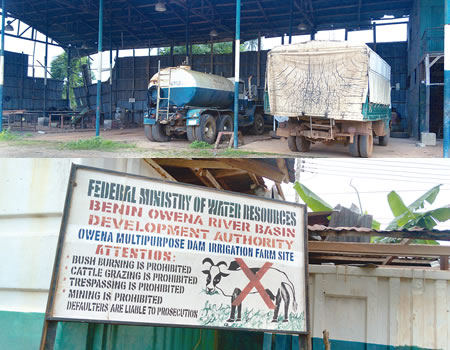 Although he said work had reached advanced stage on survey map route on the reticulation project, he added that the government would consider variation of the contract sum if the need arose but nothing was heard about the Owena dam.

When Nigerian Tribune visited the dam, the complex that used to house the workers was a ghost of its self and there were evidences that work had stopped on the project for a very long time. About three or four workers were seen sitting idle, while some of the men seen in the compound claimed to be casual workers. Fishermen were busy on the river plying their trade.

One of the workers who spoke to our correspondent on condition of anonymity said no work was ongoing at the dam and there was no plan to start work soon but said “though they have completed the treatment plant, they have laid some of the pipes but there is no development. We resume here every day doing nothing. We cannot tell you the stage of work here but we will advise you to visit our office in Akure.”

He informed that government officials often visited the dam to assess the level of work but maintained that there was no development in the level of work since 2011. He stressed the need to beam the searchlight on the dam, noting that some contractors abandoned work on the dam.

According to him, “life used to be wonderful here before government embarked on the rehabilitation of the dam in 2008. We had close to 1000 workers here but we have less than 10 workers here now while most of them are casual workers. Life can return here soon if the Federal Government can ensure that the state government fulfills its part of the agreement on the rehabilitation. At least it will create more employment. All these touts collecting illegal money in motor parks and many others will be employed. Completing this dam will surely open employment and this place will be full of life again.” 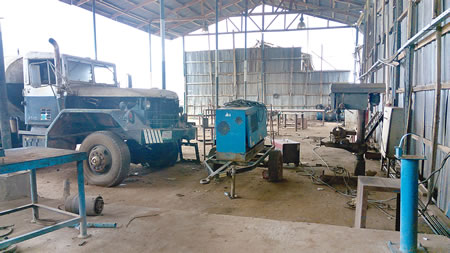 However, Nigerian Tribune’s attempt to visit the water treatment plant at the dam met a brick wall as the security guard at the dam advised our correspondent to speak with the authorities of the dam. It was observed that pipes had been laid from the water treatment plants towards the town but it was less than two or three kilometres away from the treatment plants. The road leading to the dam was nothing to write home about as erosion had taken over most parts of the road. Many of the residents of the area who are mainly farmers said they are looking towards the completion of the dam in order to enjoy some infrastructural facilities that the dam would attract to the area.

A village leader said “We have waited so long to enjoy potable water but it has remained a dream for us. We have been neglected, no good roads to transport our farm produce to town and there is no government presence here at all. We believe the dam will bring developments to the area. We are surrounded by water but we have none to drink. We usually get water from some river as no well can be sunk in this area since we are sitting on rocks. This makes it difficult to get water here.

“We want to appeal to the government, either the state or federal government, to complete this project and should not turn it to another monumental waste. All what they have put in place at the dam will amount to waste if the rehabilitation is not fully completed.”

Also a contractor who spoke with Nigerian Tribune on condition of anonymity directed our correspondent to the management of Benin Owena River Basin Authority in Akure, but said work had reached advanced stage as his company had completed its work on the dam. He said they needed to monitor the site to guard the equipment installed at the dam.

The Executive Director of the Benin Owena Water Basin Authority, Saliu Ahmed,  however cleared the air on the stage of work at the dam. He disclosed that construction of the dam was basically the responsibility of the Federal Ministry of Water Resources. He revealed that the reticulation from the treatment plants to various communities that will benefit from the project is the responsibility of the state government.

“The dam has been completed so many years back, the treatment plants have also been completed years back but never in use. Though it has been tested, we are waiting for the pipe-laying to be completed. The pipe network from the treatment plants to various towns that will get the treated water is the state government’s responsibility. That is the stage of the work right now and I know there has been very high level of consultation to get this started.

“The reticulation from the treatment plant to the various communities that will benefit is the state’s responsibilities, that is the Ondo State government and not the responsibility of the Federal Government.”

Ahmed explained that the team recently paid a courtesy visit to Governor Rotimi Akeredolu where the governor stressed the state government’s commitment in getting the dam fully completed and put into use. “I understand the governor actually visited the dam and committed getting this done even if it meant sourcing multi-lateral agency funding which I think is one of the areas the state is looking at,” he said.

Speaking on the state of the road leading to the dam, he said what should be given priority now is the pipe network and not the road saying “the road is not an issue right now. If you have paucity of funds, what will be the point constructing the road when the pipe has not been laid, which will at the end of the day affect the road? The most important thing to do right now is the pipe network.”

The Benin Owena River Basin Authority boss however said the completion of the dam depends on the state government and could not specifically say when the work at the dam will be completed. “That is not our responsibility. I cannot tell you but the Federal Government has completed its part of the agreement on the work at the dam. There’s a shared responsibility but we have done the dam, treatment plant, the piping is what is delaying. I’m sure it will be done,” he said.

However speaking on behalf of the state government, the Chief Press Secretary to the state governor, Segun Ajiboye, said plans are ongoing to make the dream of the people on the water dam a reality saying the challenges of water will soon be a thing of the past.

According to him,  the present administration in the state is determined to put smiles on the faces of the people by ensuring that the water problem of the people is solved, saying this is just one of the projects that governor Akeredolu will give priority to , and he has promised to give it his best shot.

“The government recently entered into partnership with the French. All arrangements have been concluded for works to commence, with the laying of pipes. And very soon, a larger part of the central senatorial district would begin to enjoy uninterrupted water supply,” he said.