Why we hold Nigerian flags at the protest ground ― #EndSARS Protesters 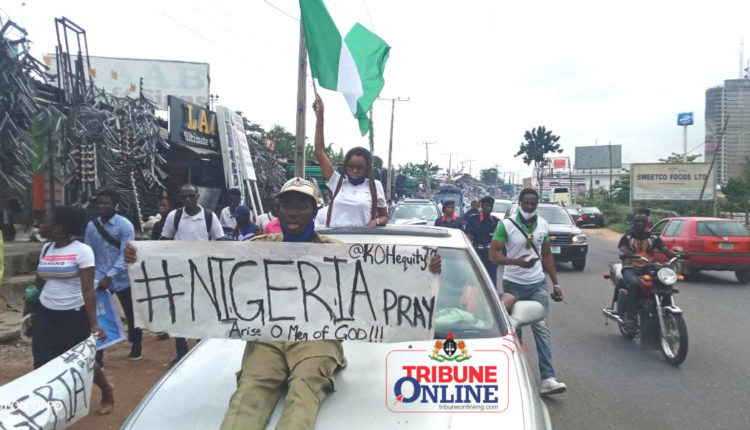 The EndSARS Protesters at the Lekki Toll Gate have been observed holding the Nigerian Flags at the protest ground on Saturday.

This is as the protest against the police brutality in the state continued to gather momentum and peaceful without any form of rancour or fight.

Speaking to a protester, John Ofeghe said that holding the Nigerian Flag means different things to the protesters.

John stated that the flag means solidarity and an expression that Nigerian can still be better despite the challenges we are going through.

He added that there is no one that can build the country except the youths; hence, they dominate the majority of the citizens.

Alex, who is a lawyer, said that holding the Nigerian Flag is a constant reminder to him that the Country is good but bad leadership has been the challenge.

The Protester explained that a country without a good leader is a country with uneven development, criminalities, and all forms of atrocities.

He added that there is no way good things can go on in a country where a bad leader is at the helm of affairs.

The Protester noted that the youths have resolved to continue to protest against all forms of police brutality and injustice in the country except their requests are granted.

Another Protester, OluwaTobiloba said that the Nigerian Flag means unity, explaining that the country can be far better if the youths regardless of their religious and tribal differences can come together as one.

She said that it is achievable if the leaders can listen to their yearnings.

Tribune Online gathered that entertainment shows are ongoing at the protest ground in Lekki Toll gate even as some people have gone to ikoyi for demonstration.

Different speakers are also on ground to speak to the protesters encouraging them not back out until their demands have been met.