Why sleeping in the dark is the best 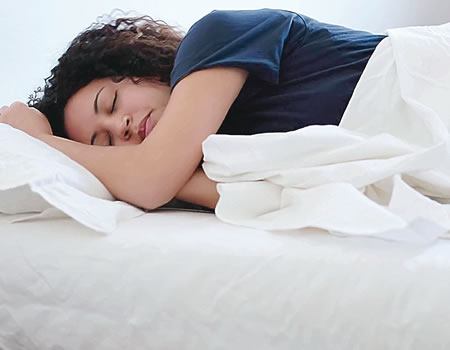 Darkness is essential to sleep. Experts, in this report by Sade Oguntola, warn against sleeping with the light on, saying it can do a lot of damage to brains and overall health.

Falling asleep with the bulbs on may be rooted in a fear of the dark. But, research suggests that over time, too much light at night could interfere with healthy sleep, possibly increasing the risk of sleep disorder and other health problems.

Whether leaving the light on purposely or accidentally after drifting off to sleep while watching TV or with the tablet or reading device on, their seemingly innocent glow research suggests interferes with good sleep.

In the review, researchers looked at various studies, including research linking night-shift work with breast or colon cancer, and light levels in the bedroom are linked to depression and obesity.

“Exposure to light at night, say from leaving the light on purposely or accidentally after drifting off to sleep while watching TV or with the tablet or reading device on might not seem like that big, but it can disrupts the production of natural melatonin, a hormone that promotes sleep,” said Dr Champion Seun-Fadipe, a consultant psychiatrist, Obafemi Awolowo University Teaching Hospital Complex (OAUTHC), Ile Ife, Osun State.

He stated that with evening approaching, and reduction in light, the brain starts to produce melatonin, which is what will make someone to sleep.

Melatonin levels naturally rise during the early evening as darkness falls and continue to climb throughout most of the night, before peaking at approximately 3 a.m. Levels of melatonin then fall during the early morning and remain low during much of the day.

Seeing light at night, he added, may throw off the body’s internal clock and impair the secretion of melatonin, which could potentially have psychological consequences.

Dr Seun-Fadipe stated “Melatonin has a lot of beneficial effects; it has beneficial effects on the mood in terms of improving it aside  from the fact that it also helps in reducing the risk of cancer, and so on.

“When people wake up during the night and introduce themselves to light or phone, for instance, the phone’s light sends a signal to the brain through the retina.

“And even with the eyelids closed, the light is detected and the brain gets confused about what time it is. As a result, the body doesn’t produce as much melatonin. So such people may not sleep again, especially if they already have difficulty with sleeping.”

Melatonin also helps to lower blood pressure, glucose levels, and body temperature, which help us to prepare for a restful sleep. With the proper amount of melatonin in the system, the cortisol levels will also remain relatively low, allowing relaxing and getting to sleep.

The habit of sleeping in absolute darkness, Professor Mayowa Owolabi, a consultant neurologist, University College Hospital (UCH), Ibadan, said: “is like sleeping in a room that is quiet.”

According to him, light like other sensory stimuli such as pain and sound can disturb the sleep cycle, and prevent a refreshing sleep.

“Usually when we sleep is when we lay down new memory. But if sleep is disturbed, then it is not refreshing. That also affects concentration and attention during the day.

“It may even lead to drowsiness during the day and that will affect mental function. So, basically, the quality of sleep and the refreshing effect of sleep are better when there is no sensory stimulation during sleep and that includes from bright lights, noise, sound or even touch. Those are things that may disturb the sleep cycle.”

Over time, the health complications from poor and insufficient sleep can be widespread, numerous, and serious. Poor sleep is linked to higher rates of anxiety, depression, and other mood disorders.

Sleep problems are associated with increased incidence of cardiovascular and metabolic disease, as well as to problems with immune function.

Poor sleep is also associated with sharp increases in accidental injury and death, as well as problems with memory and cognitive function.

However, Dr Victor Makanjuola, a consultant psychiatrist, UCH, Ibadan, said although many people sleep with light off, some individual’s body rhythms had been programmed only to sleep with the lights on.

According to him “the important thing is to get good sleep that is what is critical to mental health. If you have good sleep, irrespective of having the light on or off, your mental health should not be affected.”

In one of the studies published in the journal, Sleep, researchers at Northwestern University recruited 20 healthy adult volunteers and tracked the volunteers’ vital signs, brain wave activity, and leg and eye movements while they sleep. They also took hourly blood samples to measure melatonin.

Remarkably, just sleeping under a bright light they found drove up insulin resistance—a risk factor for diabetes. When insulin cannot do its job, the body struggles to process sugar.

What is more, the study published recently in the American Journal of Epidemiology found a strong association between even low-level night-time light exposure and depressive symptoms among elderly adults.

The researchers had measured night-time light levels in the bedrooms of 863 elderly Japanese adults and based on their findings suggested that snoozing in total darkness may be ideal not only for quality sleep but also for mental health.

Seventy three people developed depressive symptoms during the follow-up period, and the researchers found a correlation between that progression and exposure to night-time light. But while it’s not entirely clear how light is connected to depression, they said it may be related to sleep disturbances.

The connection between night-time lighting, sleep disorders, and health risks are so strong that the American Medical Association in a statement emphasised the risk and calling for the development of night-time lighting technologies that would not interfere with the body’s basic rhythms.

The World Health Organisation already recognises shift work as a risk factor for developing breast or prostate cancer due to the way in which light at night negatively affects all the body’s cycles, including sleep and wake cycles.

Perhaps unsurprisingly, studies show that nightshift workers are at increased risk of a range of health problems, from stress, constipation and stomach ulcers to depression, heart disease and cancer.

Research has shown that when you are exposed to light at night, even if it is brief, the leptin level decreases, which makes one hungry in the middle of the night—a phenomenon that wouldn’t have been very convenient for our ancestral hunter-gatherers.

Whether leaving the light on purposely or accidentally, here are steps to limit the way that light may affect your sleep:

The task before OAU

How do eyedrops work?

EU-UNICEF spends N17m on mother and child health in Bauchi