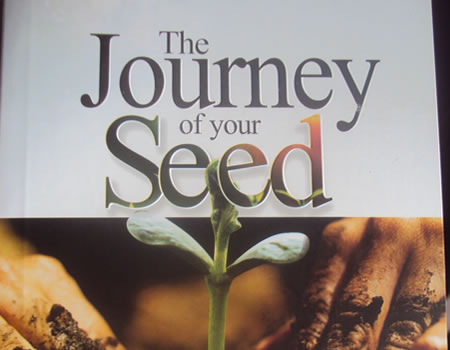 AYORINDE Awe’s The Journey of your Seed metaphorises human actions as seeds sown at every stage of one’s existence. This extends the discourse beyond the religious base of the book where the idea of a seed brings to mind the action of giving as a basic tenet of Christianity. For example, when one is asked to sow a seed, it elicits the image of giving something, especially money, however, in The Journey of your Seed, seed becomes a metaphor for man’s actions and/or inactions.

The book is structured into six chapters which are logically and thematically connected to bring out the author’s thesis on the human phenomenon of planting and harvesting, sowing and reaping. The key words, ‘journey’ and ‘seed’ reveal the fact that human existence is primarily encapsulated within the desire for progressive movement as captured in the processes associated with seed planting and the attendant expectation of harvest.

Apart from money, the author identifies positive and negative seeds with the following; acts of mercy and kindness, prayer, respect, hardwork and diligence, studying, obedience, words, time,  etc  as positive seeds while negative seeds include stinginess, hatred, laziness, disobedience, unforgiveness, greed, misuse of time, procrastination and many others which invariably bear fruits in due season.

For a seed to yield fruits certain (pre)conditions make it possible and these Ayorinde Awe has identified as the season, mood, attitude, quantity, quality, frequency, and secrecy. From this book, the fact emerges that no human is created without a seed as human lives are embodiment of different types of harvest resulting from their component seeds.

The author identifies adversarial factors that could hinder the fruitfulness of a seed such as laziness, carelessness, insensitivity, discouragement, greediness among many other enemies of a seed’s fruitfulness.

Every seed is sown on a soil which could be physical or metaphorical thus four soil types are identified as captured in the Biblical parable that forms the basis for this book. These are the wayside, the stony ground, the thorny soil and the good soil all of which contribute and determine the quantity and quality of fruits bore by a seed.

Examples of the good soil include Godly things or activities, parents, spouses, children, family, the poor, and one’s country.

Timing is emphasised as a key factor that contributes to a seed’s returns thus a reader gets to know the importance of such times as time of expectation, prayer, thanksgiving, and patience before the harvest matures.

Harvest follows every seedtime thus the author brings out some factors that one must take cognizance of in respect to harvest. The seed determines the type of harvest, as well as the quantity and quality of the harvest. Also, the duration between seedtime and harvest varies as well as harvest season ranging from months to years.

The Journey of your Seed concludes on the certainty of God as the giver of harvest which is increase to every seed sown by man especially the positive seeds.

The book which is a Christian literature based on Jesus Christ’s Parable of the Sower (Matthew 13:3-9; Luke 8:5-8)) aptly uses biblical illustrations to bring out the author’s intention as well as his vocation as teacher and pastor. The language is not complex to hinder any reader from identifying the focus: Man’s every in/action is a seed with the potential to influence one’s life at harvest which is a certainty. But more importantly, one’s life is a seed from God to benefit God and humanity.