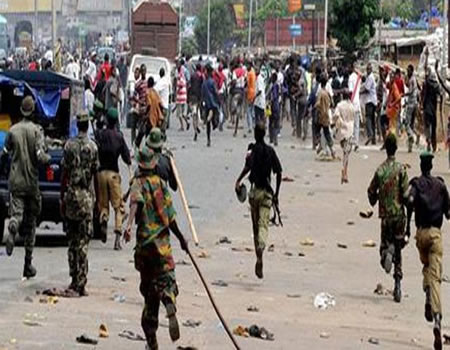 Unsuspecting traders, residents and commuters around the popular Tombia market in Yenagoa, Bayelsa State were robbed of their cash and valuables when rival cult groups engaged in a free for all shooting today.

According to an eyewitness account, the gun battle between the cult groups identified as Bobos and Greenlanders began in the wee hours of today and lasted till about 7:30 am before a combined team of the military and police restored peace.

A resident who pleaded not to be mentioned alleged that the cult clash is as a result of a struggle for the control of drug trade around the ever-busy Tombia market in Etegwe/Edepie community.

He said “they have been struggling for the control of drug trade in the highly populated area for some time now. So a result of the battle for supremacy, Bobos cult group killed one member of Greenlanders.

“So yesterday things got out of hand and about 1 am in the night we started hearing gunshots up till this morning. By morning they have destroyed properties and looted valuable.

“By morning the shooting stopped and when we thought the battle was over, they returned, this time throwing bottles at each other and those that were trapped in the middle were either robbed or injured.”

A trader, Mrs Wanemi Taylor, who resides at Kpansia Community in Yenagoa was robbed of N70, 000 on her way to buy garri at Zarama market.

Explaining her ordeal, she said “I was inside a tricycle heading to Zarama market to buy garri. I didn’t know that there was a cult clash at Tombia market area until we got to the roundabout.

“The driver was attempting to divert from the area when two armed boys held us at gunpoint and collected my N70, 000 and phone. As I speak with you my business is finished.”

When contacted, the Police Public Relations Officer (PPRO) of the state, Asinim Butswat, confirmed the story, saying there was no casualty reported during the incident.

In a short message via WhatsApp, he said “policemen responded swiftly and normalcy is restored. No reported casualty, Investigation is ongoing to identify and arrest the cultists.”