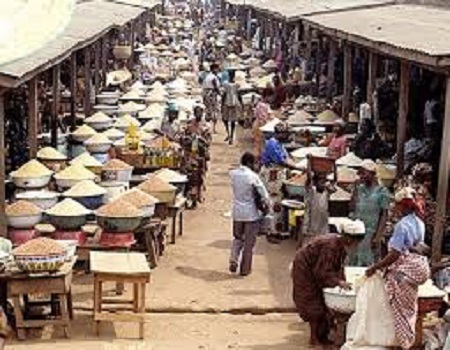 SOME traders at the Dutse Market, Federal Capital Territory (FCT) have attributed the low patronage to the prevailing economic hardship and election activities.

The News Agency of Nigeria (NAN) reports that business activities at Dutse market were at low ebb on Tuesday as the traders discussed the economic hardship.

Mr Mohammed Isah, who came to buy food items, told NAN that ”I am a father of three. The situation calls for caution, especially for those of us who are civil servants.’’

”The prices of all the commodities have gone up and there is no money, even the little you have cannot buy you anything,” he lamented.

Mrs Jumai Adejoh, a foodstuff seller said that by this period in 2015, businesses had reached their peak, but now the reverse was the case.

”We are not seeing customers and again, the products are very costly and most customers received February salaries early have finished it because of the election.

”Traders are witnessing one of the worst business downturns recently and many have closed their shops for now,” Adejoh said.

Mrs Maria Bipoe, a foodstuff dealer, urged the Federal Government to do the needful in the second term to end the hardship in the country.

She regretted the starvation being experienced in most families due to their inability to cope with the high cost of food items.

”The business is not moving as expected in view of the period we are and the reason is quite obvious.

”The prices of all food items have gone up and the people’s purchasing power is very low due to the prevailing inflation.

”I am appealing to the government to urgently address the galloping inflation being witnessed now,” she said.

Mrs Ngozi Collins, another buyer, said that she had stocked her house since the first week of February because things were expensive during and after the election, “besides, most will want to travel for election’’.

“I never used to wait for scarcity before I buy whatever I wanted so that I could keep it before the prices increase as we are experiencing now,’’ she said.

A rice dealer, Mr Hassan Idris, said that unlike in 2015 when sales were up before and after the election, this year was different.

”Now no sales at all; our customers are complaining of no money with many of them saying their February salaries had finished due to the postponement of the election.

”You come to the market and from the morning till the time you close for the day, nobody comes to price your goods let alone buying, it is really worrisome.

“I cannot wait for this election to go and let everything come back to normal because those who travelled will come back and restock their houses,” he said.

APC urges to end political dominance in Kwara on March 9

Trader in court for allegedly beating, injuring her son

Trader in court for allegedly defrauding man of N4m