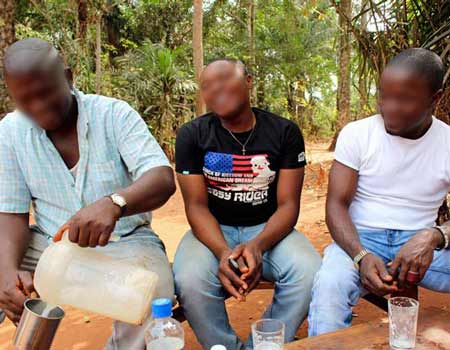 The three men were said to have drank the palm wine during a birthday party of one of their friends identified as Azeez.

It was gathered that the palm wine was prepared with the other concoction by the celebrant who served the three men on the fateful day.

A source explained that the palm wine allegedly contained some substances called gegemu and maladol which were reportedly mixed with the palm wine in order to intoxicate the consumers.

He stated that two of the trio died on Sunday night while the third friend gave up the ghost on Tuesday, while he explained that other guests at the birthday bash were rushed to hospitals in the town complaining stomach pain.

Confirming the incident, the Police Public Relations Officer (PPRO) in the state Police Command, Mr. Femi Joseph identified one of the victims as Kazeem Ogungbemi.

Joseph said the command has commenced investigation into the ugly incident and said, “We can confirmed the incident, the boys went to a party organised by one of their friends. But they drank recklessly. We discovered that the drink they drank was mixed with many substances.

“The person who served the palm wine has run away and we are still looking for him.”

When South-West governors converged on Ekiti…

After 20 years, electricity restored in Ore, other Ondo communities