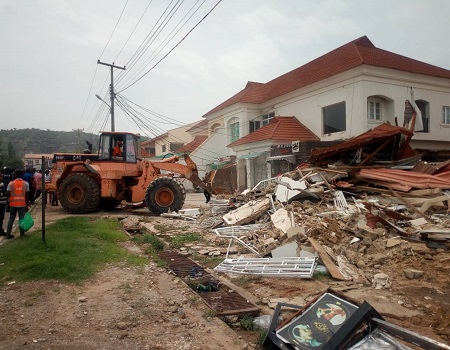 Operatives of the Lagos State Environmental and Special Offences (Enforcement) Unit (Taskforce) said it has concluded all arrangements to demolish illegal structures encroaching on ‘Idera Land Scheme’ in lbeju-Lekki area of the state, within seven days.

Chairman of the agency, CSP Olayinka Egbeyemi, disclosed this on Sunday, even as he said that Apapa Tin Can Island Park is to be redeveloped and given a new look by the state government

Egbeyemi, who disclosed this in a statement made available by the agency’s spokesperson, Mr Adebayo Taofiq, vowed that all the affected structures and shanties on Idera Land Scheme, in Ibeju Lekki would be demolished after the expiration of the 7- day ‘Removal Order’ served by the Task Force.

This was just as he further vowed that all illegal structures and buildings constructed on state lands by person, companies or institutions without valid titles from the government across the state would be demolished.

“All illegal structures and buildings constructed on state lands by person, companies or institutions without valid titles from the government across the State would be removed,” he warned.

The Task Force boss, while noting that the expiration would lapse on Wednesday, 19th of August, 2020, said the state government had observed with dismay the massive encroachment by individuals, private estate developers and land speculators on land, using them to defraud innocent members of the public into purchasing parcels of land within government acquisition areas across the state particularly around Ibeju-Lekki corridor.

He implored Lagosians who were interested in purchasing lands in the state, to first verify the Land records at the State Land Registry or Surveyor General’s Office where millions of land documents were stored in the ‘Electronic Data Management System (EDMS).’

According to him, the EDMS consists of details of documented lands and properties in the state, saying this was imperative in order for those who were out to purchase a landed property not to be swindled by speculators.

He said the quit became necessary because the entire area was set to be redeveloped and given a new look in line with the T.H.E.M.E Agenda of Governor Babajide Sanwo-Olu- led administration in transforming the state into a functional and efficient model Mega-City.

The Task Force boss further warned that a situation where illegal squatters jumped on to government acquired land to erect illegal structures and shanties would no longer be tolerated by the government.

STATE OF ECONOMY: How Nigeria Is Eating Its Future, Spent Over 90% Of Revenue On Debt Servicing
INDICATION that Nigeria’s economy is still in the throes of death has continued to emerge with the current low revenue it is generating from oil sale and increasing demands on its foreign debt obligation especially. The parlous state of the economy is heightened by the revelation that most of the revenue…Task Force to demolish illegal structures

FACT CHECK: Somalia President, Deputy DID NOT Fight In Viral VIDEO
CLAIM: Somalia President, Mohamed Abdullahi Farmaajo and his vice exchanged blows to the point of wrestling themselves to the ground.
VERDICT: MISLEADING
FULL STORY: Nigerian media space was abuzz on Saturday, August 15, 2020, with a viral video which claims to show President of Somalia, Mohamed Abdullahi Farmaajo publicly exchanged blows with his vice…Task Force to demolish illegal structures

NBS Says 21.76m Nigerians Unemployed In 2020
THE National Bureau of Statistics (NBS) has put the total number of unemployed Nigerians at 21,764,617. The figure is contained in the bureau’s Labor Force Statistics website entitled “Unemployment and Underemployment Report (Q2 2020) released in Abuja. It referred to the report as an Abridged Labour Force Survey under COVID-19 for August 2020. According to NBS, the unemployment rate during the period under review…Task Force to demolish illegal structures

Our Fears As 2020 WASSCE Beckons: SS3 Students Speak On Inability To Finish Syllabus, Other Issues
After a long unexpected delay occasioned by the lockdown from the coronavirus pandemic, the 2020 West African Senior School Certificate Examination (WASSCE) will begin in 19,129 accredited centres nationwide on August 17. Some candidates hoping to write the examination spoke with IMOLEAYO OYEDEYI and ADEOLA OTEMADE on their fears and expectations…Task Force to demolish illegal structures