•Appeals to CBN on loan repayment by states 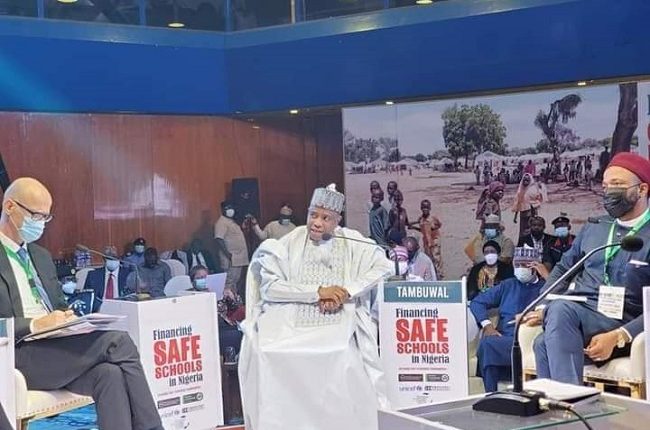 The Governor of Sokoto State,  Aminu Waziri Tambuwal has, on Tuesday, called for the creation of a Safe School Fund (SSF) to sustain the efforts by state governments, particularly those in bandits-prone areas, at protecting schools in their domain from the anti-education and anti-development machinations of violent non-state actors operating there.

This position was also canvassed by the Chairman of the Nigerian Governors Forum (NGF), Dr Kayode Fayemi, who also pledged the total support of the forum to the effective implementation of a National Framework for Safe Schools.

A statement signed by the special adviser on media and publicity to the governor, Muhammad Bello, said both Gov. Tambuwal and the NGF, in which he deputizes for Governor Fayemi, spoke as panellists at a high-level forum on “Financing Safe Schools: Creating Safe Learning Communities” convened by the Minister of Finance, Dr (Mrs.) Zainab Ahmed, which was held at the Transcorp Hilton Hotel, Abuja, on Tuesday.

Tambuwal also weighed in on the issue said to have been raised by the governor of the Central Bank of Nigeria (CBN), Mr Godwin Emefiele, that states should start refunding the loans given to them by the Apex Bank or face consequences.

The governor urged the Minister of Finance to appeal to the CBN governor to drop his veiled threat as the situation of insecurity that necessitated the states taking the loan still subsists and is even worsening, implying that if states start paying back the loans where will they get the money to ensure the safety and security of schools under them?

The governor, however, noted that under his watch Sokoto State Government has taken measures to ensure the safety and security of students and teachers in the state in the wake of insecurity in the country which resulted in the targeting of students by bandits and kidnappers.

He explained that his administration has been proactive in closing schools located along with border areas with the Niger Republic and the bandits infested areas near Zamfara State. The schools so affected, he explained, were merged with those in safe areas, while some boarding students were also sent to Day Schools in their local government areas.

In the same vein, the governor said security has been beefed up in schools across the state as more capable security guards have been recruited just as additional policemen and those of the Nigerian Security and Civil Defence Corps (NSCDC) have been posted to schools to ensure adequate security.

Similarly, governor Tambuwal stated that more security precautions that will serve as early warning systems are in place in the schools to forewarn teachers and students of any danger.

In her remarks, the United States Ambassador to Nigeria, Ambassador Mary Beth Leonard applauded governor Tambuwal for his giant strides in the educational sector, pointing out that the Sokoto State Government’s innovative approaches and total commitment to giving the sector a new lease of life are heartwarming and deserves support.

Amb. Beth, who spoke on the topic: “Current Activities to Protect Schools and Gaps to be addressed,” said she was particularly impressed with measures so far taken by the state government to ensure that schools in Sokoto State are safe.

Similarly, the governor and his administration got kudos from Ms Aisha Garba Mohammed, a Senior Education Specialist with the Nigerian office of the World Bank, who commended him for his deep insights and innovative approaches to school safety and security.

She expressed optimism that the Sokoto model will form a major plank of the National Framework for Safe Schools in Nigeria.