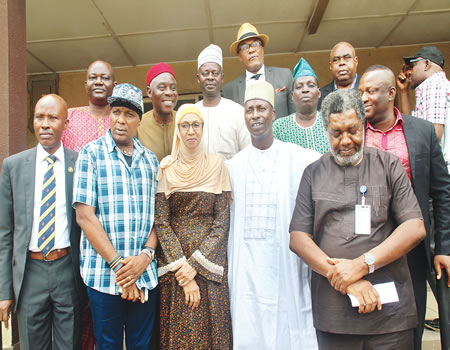 The National Film and Video Censors Board is set to revitalise the dying dreams of the founding fathers of the film industry,whose sheer efforts brought the sector to phenomenal limelight  but have so far recorded pains and tears as a result of the sabotaging works of people bent on crippling the industry.

To this end, the board in its determination to put things in shape, on Thursday, inaugurated  a special Task Force that will check unclassified films and video works /unlicensed distributors across the country.

The newly appointed Executive Director of the Board, Alhaji Adedayo Thomas said that the industry was  built on the sweat and toils of its doyens, not by the government, adding that “ My own responsibility as one of the representatives of the government is to rekindle dashed hopes and fertilise the soil for their seeds to thrive and reap bountiful harvests from their toils and labour in the sector.

“As most of us are aware, the National Film and Video Censors Board is a strategic parastatal of the government of the federal Republic of Nigeria under the ministerial supervision of the Federal Ministry of Information and Culture. It was established by Act 1993 CAP N40 LFN 2004 as a regulatory agency saddled with the responsibility of regulating the Censorship, Distribution and Exhibition of Films and Video Works in Nigeria, and to leverage on its regulatory roles to create conducive environment for investment and ensure the security of such investment.

“However, to the detriment of the industry, we must admit that the Board has not lived up to expectations in recent years, leading to chaos in the system; a chaotic system that has taken profit away from the right beneficiaries to the profiteers of the laxity in regulatory efforts”.

Alhaji  Adebayo elucidated that the government recognises the pivotal role the entertainment industry plays in propelling economic growth and creating mass direct and indirect jobs, which is in connection to its drive to diversify and induce more investment in the non-oil sectors.

The Executive Director revealed that the Task Force had been in existence prior to his assumption of office, and without prejudice to the efforts committed by its members, it is being reconstituted to reposition it for optimal performance and hence the very four cogent areas that are need to be addressed are Proliferation of Unclassified or Unapproved movies, Influx of directly translated foreign movies and the Distribution of movies by unlicensed agents and distributors.

“We have therefore selected men and women of impeccable character, cutting across various interests in the industry, thoroughbred professionals who have immensely contributed to the sector, and who know exactly where the shoe pinches; to man the taskforce. The members are Chief Eddie Ugbomma, Hadjia Aliyu, Olatunji Ojetola, Mr Gaboski, Mr Nobert and the Executive Secretary of the Lagos Film and Video Censors Board.

“”One of the key facilitators of these objectives therefore will be improvement on, respect for, and enforcement of intellectual property rights in the film industry. And that is what we are set to achieve with this gathering . Industry players lose billions of naira to purated, smuggled and unclassified works by mostly unlicensed agents and distributors, and thereby denying the government it’s huge accruals. The activities of these individuals or groups impacts negatively on the society, demoralized stakeholders, sends very wrong signals to potential investors , and darkens the possibilities of making right developmental policies for the sector”

“The mandate of the task force is to stem and eradicate the growing detrimental trends killing growth efforts in the industry. Though, they would be working with sister agencies and security agencies, I believe their modus operandi is classified, while. we assure everyone concerned and the general public that we at the Board are opened to the expression of their concerns or if they feel the Task force is going overboard”.

He concluded saying “ our big gratitude goes to the Taskforce Team for accepting this offer and to everyone here who will be working with us to realize the set objectives and as we take the industry to its promiseland”.