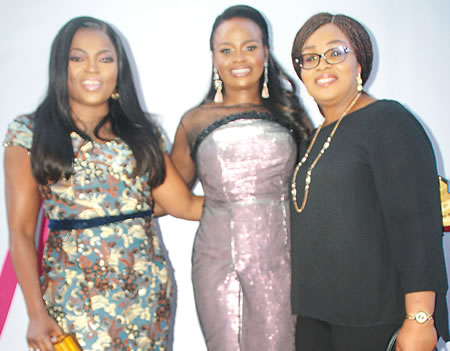 The film, which is currently showing in the cinemas, is one of the Bank of Industry-support creative industry projects under the NollyFund loan scheme.

Speaking to journalists at the event, Nwuka expressed optimism that the film would yield expected Return on Investment (RoI).

“We expect a huge Return on Investment. I expect to have my money back in one week. We put in a lot into the film and Jadesola has put in her best into this film as well and we can see the quality of production and storyline. I salute her courage. So I actually expect the best of Return on Investment on this great film,” she said.

According to the banker, BoI decided to support Isoken  owing to its strong storyline, and the fact that the producer is a promising young and upcoming filmmaker.

“At BoI, we are very passionate about working with young filmmakers and Jadesola was the first of such. With BoI buying into her passion and commitment to story-telling through film, we are happy with what we’ve seen today and equally proud to be affiliated with this project,” she said.

The story is centered on Isoken, played by Dakore Akande, who has what appears to be a perfect life: beautiful, successful and surrounded by great family and friends but is unmarried at 34 in a society where culture is obsessed with marriage. Things come to a head at her younger sister’s wedding when her overbearing mother (Tina Mba) thrusts her into an orchestrated matchmaking with the ultimate Edo man, Osaze (Joseph Benjamin).

Osaze is handsome, successful and from a good family, but in an unexpected turn of events, Isoken meets Kevin (Marc Rhys), and he just might be what she truly wants in a partner. However, not only is he not an Edo, he is ‘Oyinbo’.

It is a story of feminism, family, society and pressure, the gift of friendship and love that does not falter or fail.

Other films that have been produced through the NollyFund scheme include pan-African film, ‘The CEO’ by Kunle Afolayan; ‘Ayamma’ by Emem Isong; comic flick, ‘Three Wise Men’ by Opa Williams, while ‘Amina’, an epic by Okey Ogunjiofor and ‘Stella and Oba’ by Lasun are the next in line.