‘She’s sleeping with my brother and her pastor’ 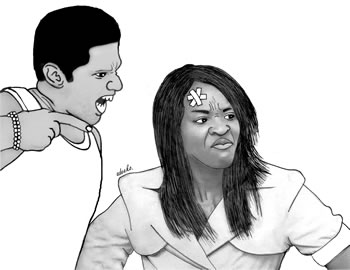 “My wife is having sex with her pastor, ’’ Francis  Stephen, a clearing agent told an Igando Customary Court in Lagos while responding to a plea  made by his wife,  Ogechi, to the court to dissolve their 13-year-old marriage.

“My wife is sleeping with her pastor. When I got to know, I confronted her and she confessed to me.

“Apart from her pastor, she was also sleeping with my younger brother.

“He added that Ogechi ran away with their children to her village when he told her that he would drag her to his family to confess her misdeeds.

According to the News Agency of Nigeria (NAN), the respondent also stated that his wife was violent in nature.

“There was a day we had a misunderstanding; she picked up a stone and broke my car’s windscreen,” the defendant said.

“Last year, my wife absconded with our children to her village without my consent.  She later sent me a message that she had got to her family in Imo State and that she is no longer interested in the marriage.

“The children have stopped schooling since last term because my wife refused to bring them back to Lagos.

“One of my children who was due to write common entrance examination  missed it.

“Her brother called and told me to come and take the children. He stated that if I leave them  with her, they may die of starvation.

“Please, grant me the custody of my children because my wife is not working and can’t take care of them.  he just wants to punish me by denying me access to them,” he said.

Stephen, however, told the court not to grant his wife’s wish for the dissolution of their marriage, saying that he still loves her and the children will need a mother to live with.

The petitioner, Mrs Ogechi Stephen, had approached the court seeking to end her 13-year-old marriage over frequent beatings and drunkenness.

She said that her husband beat her on the slightest provocation.

“He always beat me during heated argument. I live every minute of my life in fear because our marriage  is turbulent and fraught with fights and quarrels.

“There was a day my husband threatened to pour fuel on me. I took to my heels as he moved towards me with the fuel.

“There was a night he was inciting incantation and calling demonic power to kill me, ”Ogechi said.

The 42-year-old woman said that her husband drinks and smokes heavily.

“My husband drinks to stupor and smokes, after which he usually loses self-control,” she told the court.

The mother of four  added that her husband packed her belonging to her village claiming that he was no longer interested in their union.

She begged the court to dissolve the union because she was no longer in love with Stephen.