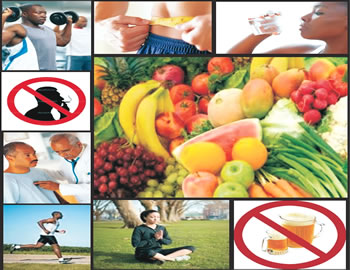 Following a healthy lifestyle — which includes maintaining a healthy weight, exercising regularly and refraining from smoking — may prevent cancer, a new study finds.

Healthy lifestyle choices could potentially prevent 20 to 40 per cent of cancer cases and about half of cancer deaths, the study found.

The study, published in the May 2016 edition of the journal JAMA Oncology, comes after a different study, published last year, found that the majority of cancers were caused by random mutations in DNA, and suggested that therefore these cases were unpreventable.

The new findings, however, “provide strong support for the argument that a large proportion of cancers are due to environmental factors and can be prevented by lifestyle modification,” the authors of the new study, Dr. Mingyang Song, a research fellow in epidemiology at Massachusetts General Hospital, and Dr. Edward Giovannucci, an associate professor of medicine at Harvard Medical School, wrote in their paper.

In the study, Song and Giovannucci looked at more than two decades of data on nearly 136,000 white men and women who were enrolled in either the Nurses’ Health Study or the Health Professionals Follow-up Study. All of the participants had regularly responded to surveys about their lifestyles, and the researchers divided the participants into two groups: a low-risk group, all of whom followed a healthy lifestyle, and a high-risk group, all of whom did not.

The researchers defined a healthy lifestyle as never or no longer smoking and never drinking alcohol or drinking moderately (one drink a day or less for women and two drinks a day or less for men). The researchers also specified having a BMI between 18.5 and 27.5, and exercising regularly (either at least 150 minutes of moderate exercise per week or at least 75 minutes of vigorous exercise per week).

The researchers noted that their study only included white men and women, the results may not apply to other ethnicities. However, all of the healthy lifestyle factors included in the study have been shown to decrease cancer risk in diverse ethnic groups, they added.

In an editorial accompanying the new study in the journal, two researchers who were not involved in the new study or the one published last year wrote that the new findings show that “cancer is preventable.”

“As a society, we need to avoid procrastination induced by thoughts that chance drives all cancer risk or that new medical discoveries are needed to make major gains against cancer,” wrote Dr. Graham A. Colditz and Siobhan Sutcliffe, both public health researchers at the Washington University School of Medicine in St. Louis. “Instead we must embrace the opportunity to reduce our collective cancer toll by implementing effective prevention strategies and changing the way we live,” they wrote.

She’s planning to take my pregnancy to another man —Husband