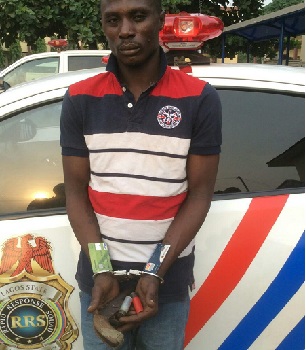 AN armed robber, who targets Automated Teller Machine (ATM) users in Alaba Rago area of Lagos State, has been arrested by the police.

The suspect, twenty five years old Gbenga Babatunde, confessed to have robbed no fewer than 35 victims who came to use ATM in the past.

Gbenga was a few days ago arrested by the operatives of the Rapid Response Squad, after a failed attempt to rob a lady who had come to use the ATM.

A cut-to-size locally made short gun and two live cartridges were recovered from the suspect, who attempted to escape.

The other member of the two-man gang, who was identified as Samson Baba Ramadan escaped after the attempted operation failed.

The suspect however claimed that the runaway Baba Ramadan introduced him to robbery and that they had both robbed no fewer than 35 ATM users.

He confessed that “I have been in the crime since I met my colleague, Samson Baba Ramadan. I met him at Field Joint, Alaba two years ago and since then we have been working together.

The suspect also said that, “As soon as the withdrawer collects the money, we will accost him or her and collect the money and escape. The last money we collected was N40, 000. Yesterday, we collected N12, 500.”

He added that “this morning, we wanted to collect money from a lady. That lady ran away. We thought she had gone, not knowing that she went to inform RRS. This was around 5a.m.”

“They pursued us and arrested me, but my partner escaped. I don’t go home. I sleep in a Hotel at Alaba Rago. It is only whenever I don’t have money that I go home. I have no wife and no child,” Gbenga added.

The image maker in charge of the state police command, Dolapo Badmos, confirmed the arrest of the suspect to Tribune Online and added that the police were on the trail of the other member of the gang.

Badmos also said that the case had been transferred to the Criminal Investigations Department of the state police command.