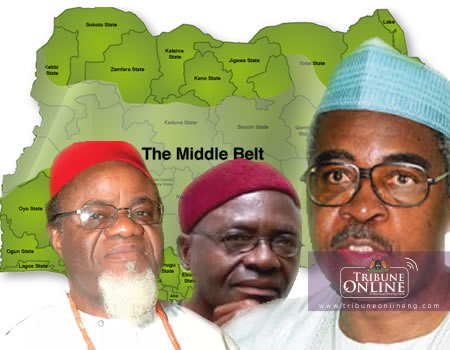 AS the restructuring summit organised by the Yoruba Leaders and South-West governors continues to generate ripples, various stakeholders and groups in the Middle Belt have backed calls for a return to regional government.

However, they are demandign the creation of additional regions from the North to cater for the interest of ethnic minorities.

The President, Association of Middle Belt Ethnic Nationalities (ASOBEN) Mr Sule Kwasau, said, in as much as the geopolitical zone supported the idea of the return to regional government, there should be slight modifications for the creation of two regions for the Middle Belt.

“We support our South-West brothers on this position, but we have our reservations. There should be amendments. Instead of going back to the four regions, as practised under the 1960 Constitution, the scope should be widened to accommodate two more regions within the North to cater for the Minority,” he said.

The lawyer said the people of the Middle Belt were seeking the two regions from the area: Middle Belt West region and Middle Belt East region, adding that such arrangement would cater for southern Kaduna, southern Borno, and many others in the North.

He said: “We have maps of the proposed regions; they are natural boundaries within the North, and we know our boundaries. We also support the position of the South-West that referendum should be conducted for ethnic nationalities that want to join others. If regional government is allowed, it will encourage development and allow every part to develop at its pace and those who want to remain at the same spot can choose to remain like that.”

In his contribution, convener of the Middle Belt Patriotic Front (MBPF), Ibrahim Bunu, said in line with the recommendation of the 2014 National Conference, more states should be created as this would form the basis of creating additional regions in the North in accordance with the people’s peculiarities and interests.

According to him, restructuring is inevitable if Nigeria is willing to overcome its myriad of challenges.

Convener, Centrum Initiative for Development and Fundamental Right Advocacy (CEDRA), Dr John Danfulani, also supported regional arrangement but with the creation of more regions to cater for the interest of the Middle Belt, adding that it would be wrong to lump the Middle Belt with the North.

In a related development, elder statesman, Alhaji Tanko Yakassai, has declared that there is no place called Middle Belt, cautioning those campaigners for minority ethnic nationalities in the North.

Alhaji Yakassai, who has been at the forefront of the campaign for a united North, was reacting to the claim of the Association of Middle Belt Ethnic Nationalities and other groups which claimed to be protecting the interest of people in the North-Central in an interview with Sunday Tribune.

According to Yakassai, “there is nowhere in Nigeria called Middle Belt and it would be wrong for anyone to claim or call any place by such name.”

He insisted that the constitution of the Federal Republic of Nigeria does not recognise such a place and, as such, a place does not exist.

“Before the arrival of  Europeans in Nigeria, we have been existing  on our own but the colonial without proper history just merge us with the caliphate, we have nothing in common at all. I can tell you, if Nigeria breaks today, we are not going with them, we can’t be one and we will never be one” he said

According to him, the idea of regional government has been persistent demand of the South West, and that is the only thing that would address the idea of structural imbalance in the country and ensure fairness.

As long as I live, I’ll fight to see a united Nigeria —Justice Akanbi, ex-ICPC boss