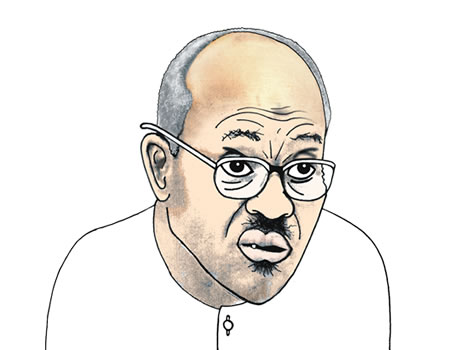 HOW it escaped the progressive cadres’ consciousness headed by Senator Bola Tinubu that General Muhammadu Buhari’s biological formation is intrinsically objectionable to reformation or restructuring of the Nigerian state beats me hollow. Not when Buhari pointedly told Tinubu in his Bourdillon home in 2014 before the merger of ACN and CPC that he preferred to forgo his presidential ambition than concede to restructuring of Nigeria.

It was both errors of the head and heart that General Buhari’s presidency, a few days ago – descended on Pastor Enoch Adeboye – the Redeemed Christian Church of God’s general overseer; activists, ethnic groups, socio-political organisations, former leaders and prominent Nigerians calling on him to restructure the faulty behemoth called Nigeria or risks a break up as ‘mere irritants disturbing the peace of the country.’

“This administration will not take any decision against the interests of 200 million Nigerians, who are the President’s first responsibility under the constitution, out of fear or threats especially in this hour of health crisis”, a statement by Garba Shehu, President Buhari’s publicist reads.

Another of Buhari’s wayward media scoundrel, Mr Femi Adesina, was derisively acerbic in his rawest form as Buhari’s worst media cheat when he enthused thus: “Since organised labour toed the path of sense and sensibility last week, seeing reason with the imperatives of fuel price adjustment, and opening a further window of dialogue on the service based electricity tariff, some groups of Nigerians have been dolorous, disgruntled, and disconsolate.”

“They had apparently perfected plans to use the strike by the labour unions as smokescreen to unleash anarchy on the land, fomenting mayhem and civil disobedience. But the plan blew up in their faces, and they have been in severe pains since then. They have launched series of tirades against organised labour.”

“For some interest groups, their intention was to use the umbrella of the strike to further their whimsical and pie-in-the-sky dream of a revolution in the country. It went bust in their faces.”

General Buhari’s media purveyors further went into the voyage of comparing Saudi Arabian fuel pump price with that of Nigeria, without sparing a thought on the country’s N305,000:00 minimum wage against Nigeria’s N30,000:00 minimum wage that can’t buy a bag of rice. Breaking it down mathematically with the compared Saudi Arabian wage and fuel pump price purchase, Nigerians should be buying fuel at N161:58 per litre. Femi Adesina and his grunting media team were blind on this actuality in the attempt to defame patriotic citizens and the necessary call for restructuring.

Buhari’s countercharge on restructuring as a known tribal, bigoted hermit hardly escaped Nigerians as an incurable irridentist. That on-your-face lampooning and bullying of the progressives who foisted Buhari on Nigerians in the first place is a big lesson for them to always rethink their political associations, going forward.

General Buhari’s hollow and blighted 60th independence anniversary speech clearly put Nigeria’s unity on the line. Before now, Nigerians have been exposed to Buhari›s tragedy in small doses, sprouting lies and nonsense. Now, one of the greatest concerns of many Nigerians has been that a demagogue from the north is on a mission to destroy what is left of the failing nation.

Not anymore. Buhari and his APC demagogues have cast a shadow on the Nigerian Project, signposting a dispirited – if you like – flawed bound of affinity and dashed same. Over the past six years, Buhari and his lackeys have been debasing the Constitution of the Federal Republic of Nigeria, favouring only northern Nigeria with projects, appointments, including virtually all the service chiefs, disgracing themselves and undermining the institutions they are supposed to defend.

To start with, Buhari never told the progressives that he was going to restructure Nigeria. He never told Nigerians that he was a competent person. Neither did he tell us that there will be equity, fairness and justice, if elected. Since he exited power nearly four decades ago, Buhari has been hibernating in his northern conclave; courting and gathering his cultic bloodthirsty following, preparatory to unleashing uncanny terror on the nation.

An unregenerated soul like General Buhari who neither reads nor wrote a book or delivered lectures in the last forty years on nation building, socio-economic growth or socio-political advancement of his own country is at best retarded and at worst sadistic. He must have been entangled and preoccupied himself with some sordid thoughts only known to his circle of friends and admirers.

Prof. Yemi Osinbajo should be sulking in bewilderment over the dismantling of his restructuring grandstanding in a northern extremist government. The minimal achievement he made by banning Federal Special Anti Robbery Squad (FSARS) while Buhari was away massaging his delicate health has been overturned. It was the fourth times FSARS and other notorious police gangs have been disbanded within a period of four years.

The good news is that the long suffering people of Nigeria are beginning to set out an agenda for the dissolution of an entity whose togetherness is devoid of similarities in religion, cultural observances or any other basic homogeneity, apart from the Northern dominance and hovering over the South, scavenging for free oil money. The bad news is that Buhari and his APC gang can no longer pretend that they›re not defeated by Boko Haram insurgency; that Nigeria is not under security and economic siege, that minimum wage is not useless, that fuel pump hike or electricity tariff is not pure wickedness.

Because Buhari has already made his deal with the devil, it›s less likely that he will heed the call to restructure the country. This is partly because citizens from his northern part where he comes from who made poor grades in public schools are allowed admission into schools, while citizens from the southern parts who made better grades are refused admissions, job placements, promotions in government establishments and other anomalies on the basis of quota system!

The only option left for patriotic Nigerians and the marginalised minorities surviving the country is to sustain the quest and struggle towards the balkanisation of Nigeria so that the northern part, which chooses to hold the entire country down, can enjoy their stagnation alone in pieces.

Ikhide wrote in through ikhideerasmus@gmail.com

Restructuring: Time no longer on Nigeria’s side —Olabode George