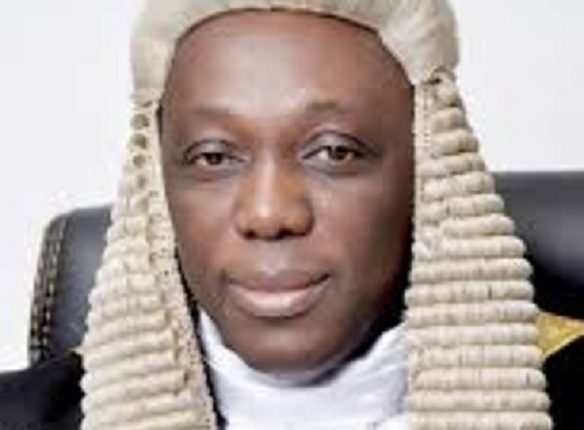 Delta State Chief Judge, Justice Marshal Umukoro has reiterated the need for the removal of prisons from the Exclusive Legislative List in the nation’s constitution.

According to him, the removal will enable states to address perennial congestion challenges plaguing correctional centres across the country.

The Chief judge advocated the reform in Ofuoma-Ughelli, Ughelli North Local Government Area of the state where he inaugurated a new magistrate court.

The call is coming in the wake of the clamour for unbundling of the prison sector by stakeholders in the administration of justice for improved conditions heightened,

He described as most despicable a situation were awaiting trial inmates spend more than five years in custody without being produced in court to face their trials.

The Chief Judge who decried the inability of the Federal Correctional Centres to produce awaiting trial inmates in court due to lack of vehicles and other logistics, noted with dismay, that the abnormal situation was militating against the administration of justice.

“There is the need for more prison reforms to address the issue of prison congestion. It is my humble view that prison matters be removed from the Exclusive Legislative List to enable states to build their own correctional centres to take care of personers convicted of state offences and thereby decongesting the federal correctional centres that are already overstretched,” Justice Umukoro said.

He lamented the condition in Warri Correctional Centre where it housed more than 3, 000 inmates with less than five vehicles covering over 38 courts.

He stressed that if states were allowed to build their own correctional centres, they would be able to provide facilities for easy production of awaiting trial inmates in court to face their trials.

Justice Umukoro noted that the reason for creating the Ofuoma-Ughelli Magisterial District was not only to bring justice closer to the people but also to prevent recourse to self-help by aggrieved parties.

He appreciated Governor Ifeanyi Okowa for his continued support to the state judiciary to perform its constitutional duties; the traditional ruler of Ughelli Kingdom Evangelist Oharisi 111, Dr Isaac Akpoveta and notable indigenes of the community for their various contributions in establishing the court.

He charged members of the bench and bar to work harmoniously to advance the course of justice.

He enjoined members of the bench to be alive to their Judicial oaths, even as he advised youths to protect the court and other government institutions to attract more developmental projects to the community.

The chairman of the Nigerian Bar Association, Ughelli Branch, Mr Eromonsele Ayo-Okhiria said that the creation of the new court had expanded the frontiers of the practice of legal practitioners in the jurisdiction.

The President-General, Ughelli Descendant Union, Chief Pius Omubaye, thanked Delta State Government and the chief judge for bringing justice closer to the people, promising to provide conducive environment for the court to operate.

Rector calls on FG to bail out institutions from imminent collapse