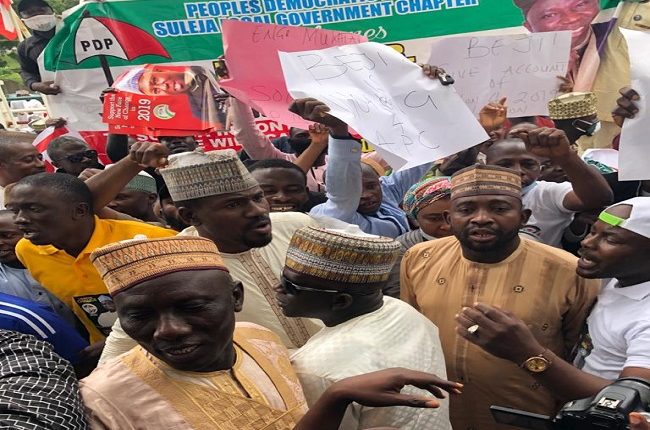 Protesters on Wednesday besieged that national secretariat of the Peoples Democratic Party (PDP) for the second day in a row but this time, demanding the removal of the National Financial Secretary, Abdulahi Maibasira, for alleged anti-party activities.

Today’s protesters, who stormed the Legacy House, Maitama Abuja used by the National Working Committee (NWC) of the party as an alternative secretariat, were from Niger state, the home state of Maibasira.

ALSO READ: True Position on Investment in Nigeria and challenges faced from LADOL

Wednesday’s protesters are different from the Niger PDP members who demonstrated at the party secretariat on Tuesday to kick against the manipulation of local government congresses result.

The tens of party members who came on Wednesday from Suleja Local Government alleged that the national office was romancing with the All Progressive Congress (APC) in Niger state against the interest of the PDP.

They also vehemently opposed what they alleged is an attempt to impose the former state Chairman of the PDP in the state, Tanko Beji, for another tenure against their preferred choice of Mukhtar Ahmed.

Constitution Review: Middle Belt Congress Seeks Additional 19 States, Abolition Of Local Councils
Ahead of the proposed amendment of the 1999 Constitution by the Senate ad-hoc committee led by Senator Ovie Omo Agege, the Middle Belt Congress has submitted a memorandum to the Committee.
Investigation revealed that the MBC is seeking for the creation of an additional 19 states in the country to make the total number of states to 55… PDP