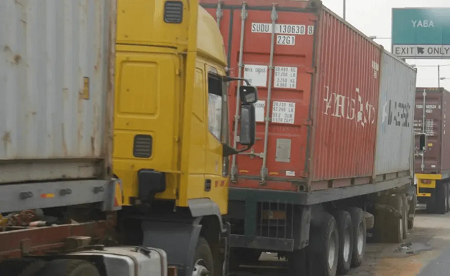 Trailer drivers on Friday blocked the popular Minna-Suleja Abuja highway in protest against the closure of Minna-Bida road presently being rehabilitated by the Niger State government.

The blockage at Lambata has brought about long queues of vehicles that paralysed social and economic activities in the area.

It has also obstructed vehicular movement on the busy Federal highway. The protesters insisted that they were not going to suspend their protest until Niger State government reopens Bida-Minna Road that has been closed down for about nine months.

The Minna-Bida Road has also been closed following the ongoing works embarked upon by Messrs Santa& Sawoe Construction Company on the orders of the Niger State government.   Therefore articulated vehicle drivers are forced to use Bida-Lapai-Lambata Road that is in a serious state of disrepair, making them spend several days before reaching their destinations.

Some motorists plying the roads thereby appealed to the Niger state government to urgently intervene to ameliorate their hardship.

In its reaction, Niger state Commissioner for Information and Strategy Alhaji Muhammad Sani Idris said there was no going back on the closure of Minna-Bida road axis of the state.

Alhaji Muhammad Sani Idris explained that such blockage became imperative to enable them to save the millions of naira spent by Niger State government on repairs and reconstruction of that road hitherto worsened by trailers and oil tankers due to overload and reckless driving on the dilapidated Minna- Bida road.

He, however, disclosed that he and the Commissioner for Works and Infrastructural Development, Mamman Musa will see the Minister of Works and Housing, Babatunde Raji Fashola (SAN) on the issue since it is a Federal road.

Alhaji Idris noted that both Niger State, Governor Alhaji Abubakar Sani Bello and some stakeholders in the state have pleaded with Federal Government severally to construct the road to cushion the effects of the hardship being experienced by motorists with no fruitful result.

Saturday Tribune, however, learnt that up to the time of filing in this report, the protest had been on for about five hours.