Agriculture
By Biola Azeez|Ilorin On Jun 1, 2021 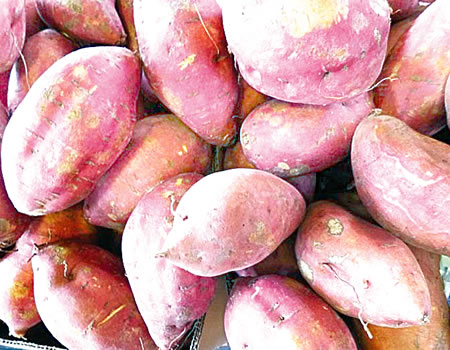 AGRICULTURE experts drawn from six geopolitical zones in the country have met in Ilorin to brainstorm and suggest ways of improving production, consumption and value chain of Orange Fleshed Sweet Potato (OFSP).

The 40 agric experts at a three-day workshop, titled, Orange Fleshed Sweet Potato (OFSP) forum for farmers, processors, value addition specialists and other stakeholders for improved production and consumption in Nigeria in the Agricultural and Rural Management Training Institute (ARMTI), Ilorin was led by the executive director of the institute, Dr. Olufemi Oladunni.

Speaking at the forum, Dr. Oladunni said that OFSP had helped to improve on nutrition, employment generation and reduction in poverty among the people.

“OFSP has brought brightness into Nigeria in three phases; nutritionally, employment wise, and reduction of poverty. It has brought brightness among people because when people are healthy, they do more of agriculture, do other components of the value chain and they enjoy better life and their income will increase and they will be able to move out of the poverty trap.

Dr. Oladunni, who also said that OFSP could solve farmers/herders clashes and open grazing problems in the country, added that peels of the OFSP could serve as nutritional feeds for cattle, among other benefits.

“Once you have all the necessary ingredients for an animal to feed on, without moving up and down, it will bring good health to animals in terms of quality meat and milk and healthier milk production. And then the livestock farmers would be able to get more income and this means having another value chain being promoted (livestock) in terms of feeding because it will reduce the cost of feeding, and the human being that leads the animal will also become more healthy by taking the OFSP products and by not trekking before their animals can feed and this will also eliminate farmers/ herders clash that is rampant now”.

The ARMTI executive director, who said that the institute started the programme on OFSP in 2012, added that, “this year is mainly about advocacy and also trying to bring all the stakeholders together from different components of the value chain of OFSP. The journey might be slow but at least we are not on the same spot. There is no year we missed this programme even during COVID and every year has been with different themes. The first three years of the programme was sponsored by a foundation in Nairobi, Kenya under the auspices of potato center in Peru. According to them, Nigeria is the only country that still sustains a capacity building programme of OFSP issues. This is a complement for us and it is with the help of federal Ministry of Agriculture and Rural Development, the National Assembly and the President for releasing fund for this programme”.

Also speaking, the principal consultant for the programme, Mr. James Ogunleye, said that the workshop offered opportunity in bringing together OFSP farmers, processors and marketers, who would assist to escalate knowledge and uses of OFSP.

“Majority of us farmers suffer a lot of setback last year through, clot, flood and inconducive weather, among many other challenges. This forum will give us the opportunity to exchange ideas and interact on how to expand knowledge on OFSP.

“We have processing so that those who produce will not have fear of how to dispose their roots and those who process will know where to source from. Because of the challenges we suffer in the past, some people have decided to produce pines and some act as middle men between the farmers and the processors. Without an avenue to exchange ideas we will be suffering in the different organizations. With this stakeholders meeting, we will be able to build a viable relationship among us that we can leverage on. There are few people here that are all rounder; they are farmers, processors, marketers in their own little ways. With the exchange of ideas and expansion in knowledge base, we will be able to publicize OFSP because countries like Ghana, Uganda, Tanzania, Kenya are doing better despite the fact that we started together. Some farmers had terrible experiences last year when cows consumed their farms towards harvest. Part of what we will leverage on is to challenge ARMTI on how to assist us on some recommendations because experience is the best teacher and we have had nasty experiences. This forum will help us share our experiences and eradicate our fears about going all out on OFSP.

“OFSP is a unique produce which serves as benefits for vitamin A deficiency in young children, apart from other numerous uses one can put it into eg cream, flour, cakes, etc.