• with your support, we will defeat the APC candidate in 2023 - Adedipe 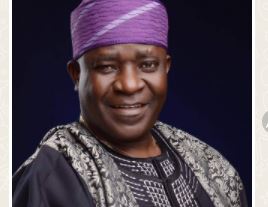 The  Ondo Central Senatorial candidate of the Peoples Democratic Party (PDP), Ifedayo Adedipe, has extended hands of fellowship to his co-contestants in the just concluded party’s senatorial primary in Ondo South, saying the party can only defeat All Progressives Congress (APC) in the 2023 general elections with their support.

Adedipe stated this in a statement, adding that the party has all it takes to unseat the APC by defeating any candidate the party puts forward for the poll, but not without the support of the two aspirants who contested with him.

He said “our party, the Peoples Democratic Party, has demonstrated its firm hold on the tenets of democracy and its seriousness to continue to represent the Central Senatorial District and eventually take over power in the State.

“My sincere appreciation goes to my colleagues in this race; the Distinguished Senator Ayo Akinyelure and Engr. Clement Faboyede, for the very mature campaign they ran and for being true party men.

“I want to particularly thank them for their spirit of sportsmanship and faith in our great party. We are all brothers and compatriots in the very big PDP family.

“I am not unaware that while the primaries are over, the real work still lies ahead. I, therefore, call for the support of my co-contestants in the onerous task ahead.

“I enjoin my colleagues and our teaming party members and indeed the good people of Ondo Central Senatorial District, to please join hands with me in driving our party to victory in the general elections.

“If we work together, we shall arrive at our destination faster and safer. Let us please do this together, so that we can continue to give hope to our people.

“In the days ahead and after due consultation with party leaders and critical stakeholders, we will begin to put in place structures for the assignments ahead”

The Senatorial candidate said “I want to sincerely thank all our party leaders and delegates for counting me worthy of their votes, and for the very transparent and peaceful manner in which the election went.

“Let me again restate my commitment to providing a very good representation for our people, as clearly enunciated during my campaigns across the Senatorial District”

Why we were at Okorocha’s home ― EFCC