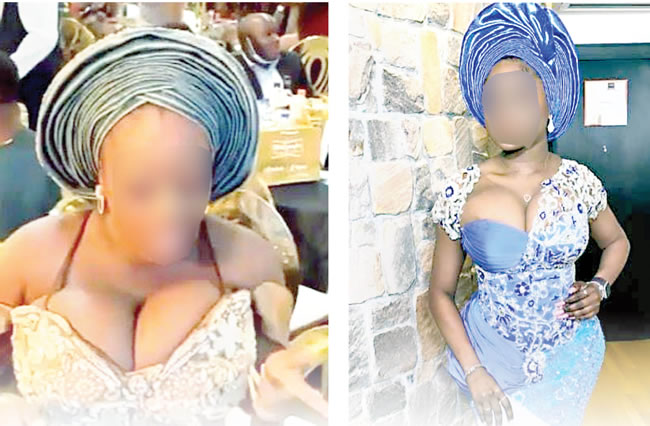 Social events around the country have become the avenues of showing off the craziest latest fashion trends. ADEOLA OTEMADE reports that these fashion trends, especially by women who leave little to the imagination, portray the depth of decadence into which the society has fallen.

Social events around the country, especially weddings and birthday parties are currently making the news mostly as a result of the fashion trends that participants bring to the venues. Gone are the days when formal dressings were the in-thing at such events. Today, the crazier the fashion, the longer the party sticks in the memory of those who attended or those who would later see them through the social media.

With this trend, the ‘woke’ generation, appears to contradict the cliché that “the way you are dressed is the way you will be addressed.” Thus, the current fashion trend is now not just about looking good, but about being the most daring. According to the Sunday Tribune investigation, today’s young women appear to be the main culprits, as many of them now throw caution to the wind, probably in an attempt to draw attention.

But GbengaAbodunrin, a socialite and entrepreneur, maintained that modesty isn’t a relic of the past, and that there are still people who dress responsibly in spite of the nature of the social events. He was reacting to the new fashion trends at social gatherings, which are as beautiful as some of them are appaling.

“Modesty in its current form cannot be said to be a thing of the past,” Abodunrin argued. “Although what works for one individual might not always work for another, some people are still very sane with their dressing; I am privileged to be a socialite and I attend on average one party per week. You can tell that many people have thrown caution to the wind when it comes to modesty, but quite a few people still have their heads together, rocking classy and decent outfits. So, modesty is not a thing of the past although nudity as a trend is prevailing and raising its ugly head,” he said.

According to QudusOkufuwa, a sociologist, the degree of societal value appears to be the key issue, rather than modesty being a thing of the past. Many individuals, he claims, still dress nicely, and many women still value decency.

“Many people still dress appropriately, and a lot of women still value their self-esteem. The biggest issue right now is the degree of (our societal) value. While some people believe that displaying a little skin is acceptable, others believe that no skin should be on display at all. The degree of modesty varies by location and the type of stuffs they are exposed to or what society accepts. It also depends on geographical location. The level of nudity at social events in Osun, Oyo and Ekiti states, for example, is significantly different from that of Lagos.

“Even in Lagos, social events on the island has a distinctly higher level of display of nudity than other places on the mainland. Depending on the extent of exposure and acceptance by society, many families and communities still frown on obscene dress, but modesty is rapidly fading,” he explained.

Temiloluwa Ade-Alao, a public servant, however, argues that modesty is already a thing of the past, citing the fact that feminism has provided a platform for many women to dress irresponsibly, citing the freedom to wear whatever they choose.

“With the way women and even our young generation dress, modesty is clearly a thing of the past. This is based on the current feminism/equality mantra being embraced by everyone. Everyone claims they want to have distinct personalities with the freedom to do whatever they want and this has contributed to the current moral degeneration in society. Everyone is lawless; we dress shabbily and call it ‘being in sync with oneself,’” she explained.

But OwoseniMakanjuola does not believe anyone should jettison modesty in the name of fashion. According to him, modesty is a lifestyle or a way of life imbibed by individuals and society at large that should serve as part of moral compass.

“Being modest is not a phase, a thing that comes and goes, or a product that has an expiry date,” Makanjuola, an entrepreneur, began. “When we talk about modesty, we’re talking about a continuous present tense, a way of life. Therefore, there’s no such thing as modesty in the past. Modesty is a way of life for many people. But, if you look around these days, it’s as if  that [value] called modesty has vanished from our lexicon. Why is that? It is because our generation and the next want to copy other people’s cultures; they all want to be like what they see on television and social media. Some of our children and teenagers have had a good upbringing, yet it appears that they have walked off track,” he explained. 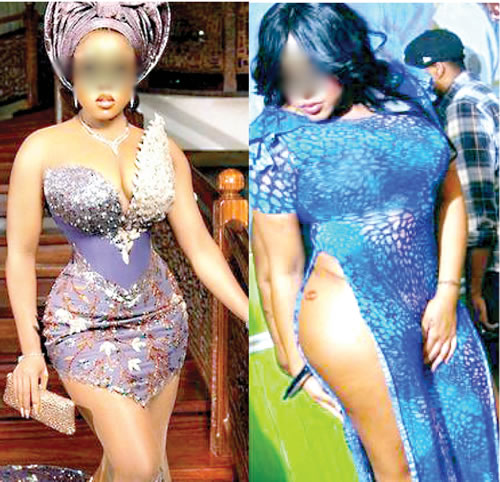 Why indecent dressing is now attractive

According to Okufuwa, the breakdown of societal value system, including the desire by the younger generation to ape western culture, is the root of the problems.

Explaining further he said: “I feel the trend is as a result of our deteriorating social value system, which is mostly caused by emulation of western culture and the propagation of immorality by our entertainment sector, (most of the time, musical videos). Such indecent dressing at parties is quickly becoming the norm, and I believe it stems from a desire for attention and a desire to stand out or be different.

“Many of these people (particularly ladies) seem unconcerned about how they ‘stand out’ or ‘get noticed.’ To them, so what, even if it means exposing some breasts or thighs? Many individuals underestimate the influence of the media. Whatever fashion entertainers, such as Olamide, Davido, Burna Boy, Wizkid, Naira Marley, and others display, would later become a fashion trend.”

Abodunrin took the issue further by identifying  the ‘insane’ drive to be recognised as ‘trendy’ and the yearning for validation as one of the reasons many people chose to dress indecently.

“Many factors have contributed to the recent prevalence of indecent attire at social functions. First and foremost, I believe that the desire for validation is driving many people. Some people want to be tagged trendy, and in all honesty, being trendy does not equate to nudity; there are many trendy and classy outfits.

“However, everyone wants validation; it’s what we call ‘chasing clouts,’ and it is not social media clout, but life clouts. People want to walk into a gathering and draw everyone’s attention at all times, and that’s why a lot of girls gravitate toward this trend. It is a cankerworm that is burrowing into our moral system,” he lamented.

Abodunrin also blames the ‘woke’ generation for the problem, adding that being ‘woke’ entails a slew of negative aspects.

“This generation is ‘a woke’ generation and a lot of terrible things come with it. The decadence that has accompanied this generation’s awakening is disturbing, and I would argue that being awake is part of what is wrong with us. You may recall that in the past, if you dressed inappropriately to an event, an older person would approach that young person and advise him or her that they could actually do better. They could even go so far as chastising the young person concerned.

“But we have a generation that refuses to listen to those who have gone before them. It has become so bad that when churches conduct social events, such as burial services or wedding ceremonies, and people wear whatever they like to the events, they’re told to cover up and that becomes a problem.

“These folks practise one religion or the other, and if that happens in a church, imagine what could happens at a party. People nowadays believe that whatever they do with their lives is none of other people’s business,” he explained further.

But QudusOkufuwa said the younger generation is not entirely responsible for the collapse of social structure. Being ‘woke’,he insisted is not the main cause of what is being witnessed today.

“Though it has something to do with being ‘woke’, that isn’t the sole issue. It is possible to be a ‘woke’ and yet be decent. Dressing and exposing the body isn’t just about the younger generation; even the older generation is guilty. At gatherings, you’ll see older women with half of their breasts dangling out,” he said.

Like Ade-Alao, Makanjuola believed that there is need for restoration of morals in the societyjustas he emphasised the importance of the home, school and religion in the development of a better community.

“Call me archaic, but what is ‘woke’? I don’t care what that represents. But, in our communities, the near-nudity trend has become the main course meal due to lack of impartation of morals on the younger generation. How do we put proper morals into practice? It begins at home and extends to the schools and religions. Losing all sense of morality all in the name of having the freedom to do anything after attaining a certain age is not practically sensible,” he admonished, calling on parents to provide the right moral guide for their female children while urging women to value their womanhood and not open up their treasured self-esteem for the satisfaction of a laschivous public

What I want to achieve with my movie, Kokoro — Olabisi Adeyemi

Presidential Circus: A case of ‘many declarers, few repairers’?

How Alfa lured client to death for ritual purpose